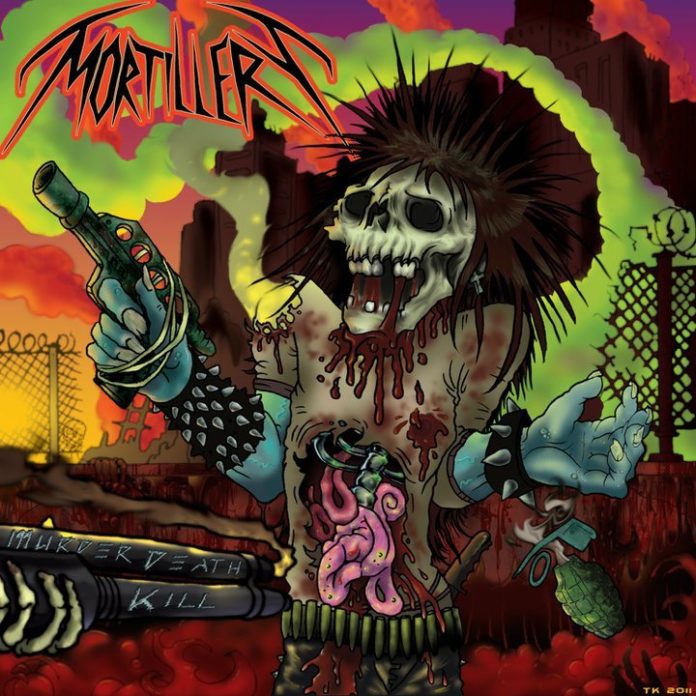 While thrash metal is not always predictable, albums and songs tend to share, as a common characteristic, a love for violent names and imagery. While some bands do it in a more subtle way (e.g. Kreator’s “Lords of Chaos”) bands like Mortillery go the extra mile and make sure that you have no doubt as to what you’re getting into, with a (campy) cover and an album name that reminds you of how 80s movies painted heavy metal of any kind.
In terms of sound, “Murder, Death Kill” is a thrash album that would feel at home in the late 80s, borrowing heavily from bands such as Nuclear Assault, Metallica and Megadeth, although with the twist of having a female singer (Cara McCutchen), something that is uncommon in thrash metal. Mcuthcen’s vocals are, by far, one of the highest points in the album, as her great range allows her to deliver a performance (occasionally growl-y) that shows that she has little to envy from her male counterparts in the thrash metal scene, with the added bonus that she’s able to reach the high notes that other bands can only try to reach. In terms of melodies, there’s a clear influence of bands such as Death Angel and the above mentioned Nuclear Assault.
This constant sense of deja-vu when listening to the album is one of the lowest points, because once you take away the novelty of McCutchen as a singer you end up with a band that does not really stand out for its creativity. Don’t get me wrong, McCutchen‘s role in the band is much more than being “that girl that sings thrash”; far from it! But her presence definitely gives an edge to the band that perhaps they wouldn’t achieve with a different singer.

In terms of lyrics, the album also hits a low point. While bands such as Metallica (in its early year) aimed at writing good and deep lyrics for songs such as “The Four Horsemen”, “One” and “Master of Puppets”, Mortillery just sticks to a constant, and repetitive, tongue-in-cheek reference to death, zombies and the like, something that may bother those who actually like to listen to the lyrics.

If you enjoy retro thrash, Mortillery‘s “Murder, Death, Kill” will, definitely, satisfy yo; however, don’t expect anything groundbreaking or unique, because this is simply not the place for that. Good? Yes. Memorable? Far from it. It’s definitely worth a listen and good enough to make you hopeful about a future release.