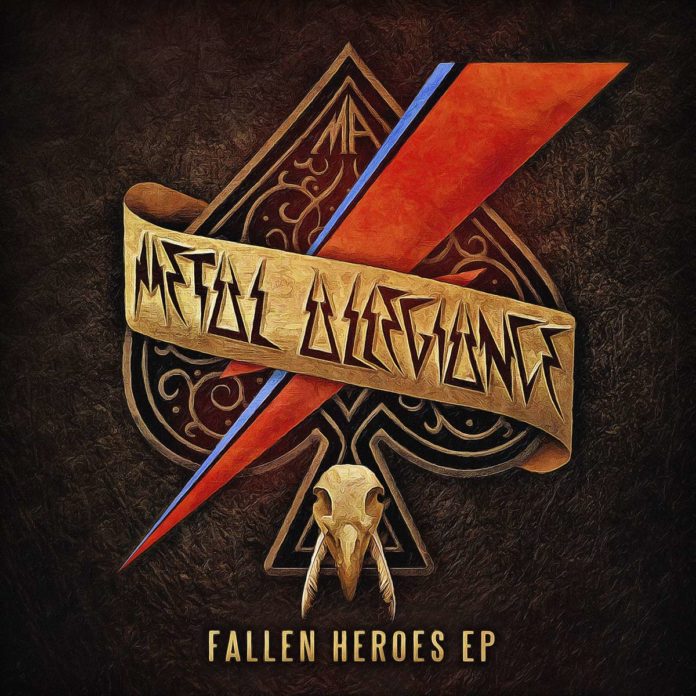 I feel it would be somewhat dishonest of me not to mention that I didn’t have particularly high expectations going into this EP. A metal super-group doing covers of three bands that have had members die recently? I can go with that, though it seems kind of gimmicky. Who’s being covered? Well, there’s “Iron Fist” by Motörhead (seems fitting), “Suffragette City” by David Bowie (well, it’s Bowie, alright), and “Life in the Fast Lane” by Eagles (uh…). Feel free to discuss/defend the merits of Eagles in the comments if you want, but they do seem like the flat wheel in this tricycle of post-mortems.

But ‘what about the actual performances?’ That’s the only pertinent question, and on that front Metal Allegiance show about what you’d expect from the set-up. “Iron Fist” is done pretty well, and though the production leaves it sounding much too clean, the united playing captures some of the original’s spark and spontaneity without sounding over-rehearsed or particularly forced. “Suffragette City” holds less closely to the original, dropping the coy sauciness of Bowie‘s yowling for a straight-forward rocker interpretation, and while the guitar-work show some flair, the whole feels too dry and uninspired to communicate any sense of real affection for the song on the part of the performers. Lastly, “Life in the Fast Lane” cranks up the base tempo slightly, down-playing the song’s guitar hooks in favor of pumping up the drum’s presence significantly in comparison to the original.

At the end of the three songs, it’s hard to even remember them without having the originals float up to take their place. The biggest fault I have with the EP, really, is that despite the backgrounds of the various members, the end result is just metal so generic I can’t even come up with a sub-genre into which I could slot it. If it’s the result of paying tribute to the mid-to-late-’80s commercial metal (and I say this without having heard Metal Allegiance‘s actual album), then it’s a solid emulation; without that qualifier, it’s just disappointingly bland. If you’re an obsessive collector of poorly-conceived cover songs (and you’ve already picked up the latest from Cleopatra Records), this may serve as an amusing addition to your library. For everyone else, I can’t imagine this would be of much interest.

IN A NUTSHELL
Pretty much just a novelty item to listen to a couple of times and then forget.
POSITIVES
Good energy from the musicians
Snazzy guitar noodling
NEGATIVES
So slick that there's little sense of personality to the music beyond '80s homage.
3
Support the band (and US!) by purchasing their albums!
Amazon USAmazon UK