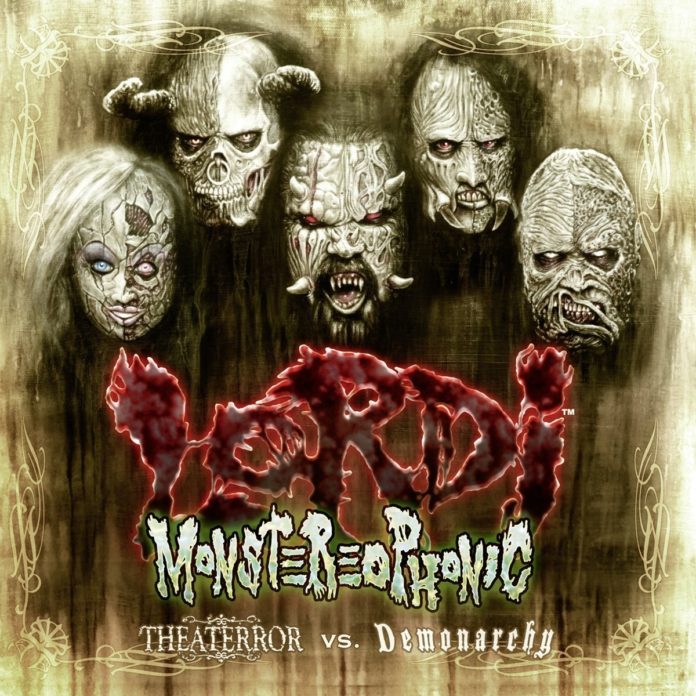 Lordi are a divisive band for metal fans. Starting out as a shock-rock band in 2002, at least as far as their lyrics and stage presence were concerned, they rose to unprecedented levels of fame after their successful participation in the 2006 edition of Eurovision. This level of success, particularly obtained in what is clearly a “pop” forum, created a certain backlash, since liking Lordi, who were now known outside of the normal metal fanbase, would no longer be cool. I’m not even making that up. The funny thing about that is that Eurovision didn’t change Lordi’s sound at all; in fact, if you liked them before 2006, you would definitely be comfortable with any of the albums that they released afterwards; if you hated them before (and there are plenty of reasonable people who hate their guts) your hatred would remain the same.

With their latest release, Monstereophonic (Theaterror v. Demonarchy), Lordi demonstrated that, despite their flirtation with the elusive “mainstream success,” they have indeed tried to maintain a certain consistency within their work. This is an album where the band sticks to its guns as it unleashes the kind of horror-inspired material that made audiences fall in love with them when they encountered cuts like “Blood Red Sandman” (from 2004’s The Monsterican Dream) or “Monster, Monster” (from their 2002 debut, Get Heavy).

For a band that has always been proud of the influence that Kiss had on them, Lordi do dare to break some boundaries that the sexagenarian duo quartet always stayed clear from. Whereas Kiss, having made a career out of singing about getting laid, being cool, or being super motivated, can now be found opening wholesome places like a “Rock & Brews” restaurant at an Indian Bingo and Casino joint, Lordi, influenced by classic horror films like The Evil Dead and The Last House on the Left, delight themselves in nauseating their audiences with tales of terror. “Hug You Hardcore,” the first single of this new record, is actually an interesting example of how Lordi, even though they largely stick to what they’ve always done, try new things.

These adventures notwithstanding, there’s no denying that Monstereophonic does play it safe in its musical content. By and large, Lordi maintain the same sound that made them famous, with some of the songs (like “Sick Flick” and “None for One”) sounding like they could have been placed side-by-side with any of their previous releases. Lyrically, of course, they stick to the horror theme (they are, after all, a band of monsters) with songs about werewolves, zombies and demons, as well as a strange and cheesy anti He-Man song. There are definitely some golden nuggets here and there, like “Demonarchy” (heavy and with a hint of power metal thrown in), “Down with the Devil” (as straightforward as they come, though sounding pretty close to their backcatalog),“Hug you Hardcore” (I’m still obsessed with that creepy riff), and the epic 7-minute finale, “The Night the Monsters Died,” but nothing that will change anybody’s opinion.

Although dismissed by many as merely a novelty band, a bunch of people running a gimmick to the ground, the truth is that Lordi are more than that. Under the costumes and the lyrics (which are, yes, pretty cheesy at times), there are a bunch of talented musicians who continue to deliver what is clearly a loving tribute to classic heavy metal. They keep things simple, they know what they want, and they’re happy to give it to you. True, their costumes have seen way more changes than their sound (and this is perhaps the biggest criticism that can be leveled against them), but there’s a certain honesty to people who, having succeeded in an international pop stage, decide to destroy their undeserved family-friendly image by forcefully shoving a strapon up a man’s ass. And, you know what? You gotta respect that.

IN A NUTSHELL
While it will not change anybody's minds, Monstereophonic shows a band sticking to their guns when it comes to creating heavy metal, come what may.
POSITIVES
Straightforward in its approach.
NEGATIVES
Nothing new to see here.
4
Support the band (and US!) by purchasing their albums!
Amazon USAmazon UK

This writer didn’t understand this album at all. The first half was meant to be cheesy and like the old lordi stuff while the second half is about a territoral war between monsters and is meant to be a concept half album with 6 plus minute songs. While I do think the writer was close i think he should listen to it a couple more times and sees if he understands then.

Hi Kieran, Thank you very much for your visit and for your comment. I read in their press package that there is this division in the album. However, having listened to it several times, I disagree that this is something that becomes obvious to the listener. Other than the song length, which indeed does go over the 5 minute mark after track 9, there aren’t gigantic musical differences here. Also, even though you say that the first half was meant to be “cheesy,” but not so the 2º part, the truth is that I have a hard time seeing how… Read more »

If you listen to the lyrics of the second half there is a clear story line i think. I wasn’t saying all of them were cheesy just most lordi songs are over the top. The Zombie says is about how the people are taking the zombies land and what he says and does about it. Overall you did have a good review though!

By the way, I don’t know if you knew, but we just published our long interview with Lordi: https://www.youtube.com/watch?v=UmY7qgFsUcA

I’ll admit the first time I heard Hug You Hardcore I thought the riff was rather unusual but now it’s kind of grown on me. I’ve heard that some of the die-hards were so surprised that the second half of the album is something more progressive. Some fans were like stick to your guns, while others were like, do something new! You’re right about the sexual torture being uncommon in horror, hence the negative reactions from the fans. But as I have said, once I paid attention to the lyrics in that song and previous ones, I started to suspect… Read more »