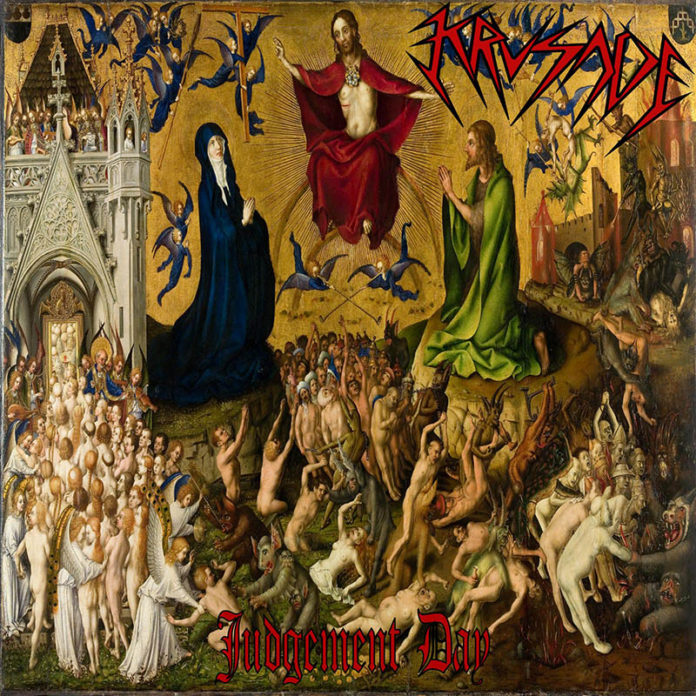 Krvsade are a young band from the US that, promising a new blend of extreme metal, are welcoming 2020 with their second EP. Although this is supposed to serve as an appetizer for a planned debut LP, Judgment Day doesn’t exactly leave you wanting more.

Made up of only 3 songs, the EP starts off with a bang, combining thrash and death metal in a powerful title track that can be easily pictured as the soundtrack for a savage moshpit. Despite this strong start, however, the EP quickly goes off the rails with the remaining two tracks. While “Keep it in the Church” starts of strong, it overstays its welcome, going on and on for almost 7 minutes, despite not really packing enough quality to warrant such a long run-time. The same can be said of “The Key and the Gate” which, at almost 8 minutes in length, is just downright boring and repetitive. Although the band makes some attempts at changing time signatures and demonstrating some kind of virtuosity, that level of skill truly seems to be lacking (the drumming towards the end of “Keep it in the Church” is so cacophonous that I sincerely thought something else was playing in the background).

There’s no doubt that Krvsade are ambitious in their songwriting, and that they are really enthusiastic about what they’re doing. The problem is that it takes real talent to be able to write a long song that actually needs to be long, and I don’t think that this band is quite there yet. Besides the music itself, this problem is evidenced by the cadence of the lyrics, which sometimes suffers as the band tries to fit long sentences into their song structure. This isn’t uncommon for young bands, who feel that they have a lot to say, but who still struggle to find how to say it in musical form.

While Judgment Day might have sought to create some buzz for a first LP, Krvsade still have a long way to go. Though they are good at unleashing a lot of energy in their music, that energy burns off too quickly as they struggle to maintain their momentum. I hope that future offerings will show real improvement in their songwriting skills, at least enough to warrant a full length release.