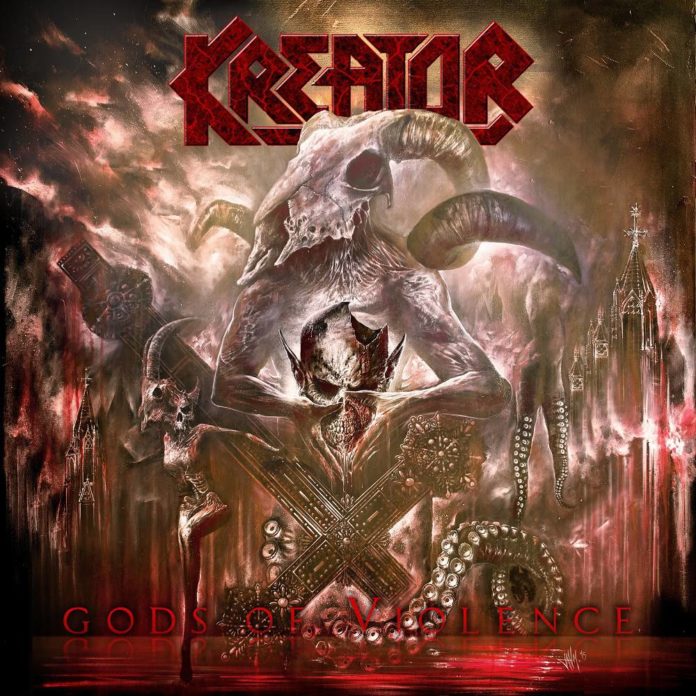 As one of the founding bands of the revered German thrash scene, Kreator have produced some of the most uncompromisingly heavy records in thrash metal, earning legions of fans in the process. With a sound that blends lightning speed with melody, they have forged a sound that has influenced countless bands, and have continued to set the bar high for their contemporaries in recent years, with such excellent records as Hordes of Chaos and Phantom Antichrist. Phantom Antichrist, released in 2012, showcased an even more melodic tone than previous efforts, while maintaining that heavy thrash edge longtime fans craved. After a 5 year wait, the Teutonic gods have unleashed a new offering, Gods of Violence, and I’m glad to say that they show no signs of slowing down.

Opening track, “Apocalypticon,” starts things off with a militaristic, orchestral overture, before quickly giving way to the violent, speed-metal attack of “World War Now.” The change in tones between those two tracks is pretty indicative of what to expect on Gods of Violence, which has a lot of twists and turns in sounds, going from melodic Gothenburg-influenced lead guitar bits to bursts of unbridled thrash metal fury. “Totalitarian Terror,” in particular, perfectly encompasses that melodic-yet-brutal sound that made Phantom Antichrist, with some of the fastest riffs of the band’s career, coupled with a super melodic chorus. Mille Petrozza’s trademark snarling vocal attack sounds as menacing as ever, but takes on a less raspy quality during the chorus, complementing the soaring lead guitar work. The acoustic guitar work at the beginning of the title track, “Gods of Violence,” work to lull the listener into a false sense of serenity, before the full band kicks in at top volume, and goes into some speed-demon riffs that quickly get the adrenaline pumping.

Gods of Violence manages to mix a little bit of everything from Kreator’s catalogue into the sound (excluding the industrial era, thankfully), and giving it all a nice, clean production. The tone on this record is similar to that of Phantom Antichrist; lead guitars are given a big boost in the mix, but the drums and rhythm guitars are still given plenty of room to keep things heavy. “Lion With Eagle Wings” is another track that is given the orchestral treatment at the beginning, with a heavily distorted vocal performance from Mille, which adds a menacing edge to the tune, before ripping into another ferocious speed-fest. The transitions between acoustic and orchestral arrangements into full on thrash sections are somewhat abrupt, but not in a way that’s too distracting; while the changes are sudden, they show a pretty impressive range of dynamics.

Though Kreator have continued to inject more melody into their sound, the venom from their early material has clearly lost none of its potency, as can be heard on tracks like “Army of Storms” and “Side By Side.” With lyrics focusing on the destructive nature of organized religion, and the global implications of religious wars, Kreator manage to remain relevant to the topics of today, without coming off as overly preachy. If you enjoyed Phantom Antichrist, Gods of War continues down that path, with everything turned up to 11. Longtime fans will also enjoy the heavier moments, and new listeners should definitely consider this a good starting point, before delving into the rest of the band’s discography. Play this at full volume to get the best results.

In a Nutshell
Kreator show no signs of slowing down, and deliver a powerful record that will please the hordes of chaos.
POSITIVES
Excellent production
Great mix of melody and brutality
NEGATIVES
Fans of the early records might not enjoy the heavy doses of melody
Transitions might be a little jarring for some listeners
4.5