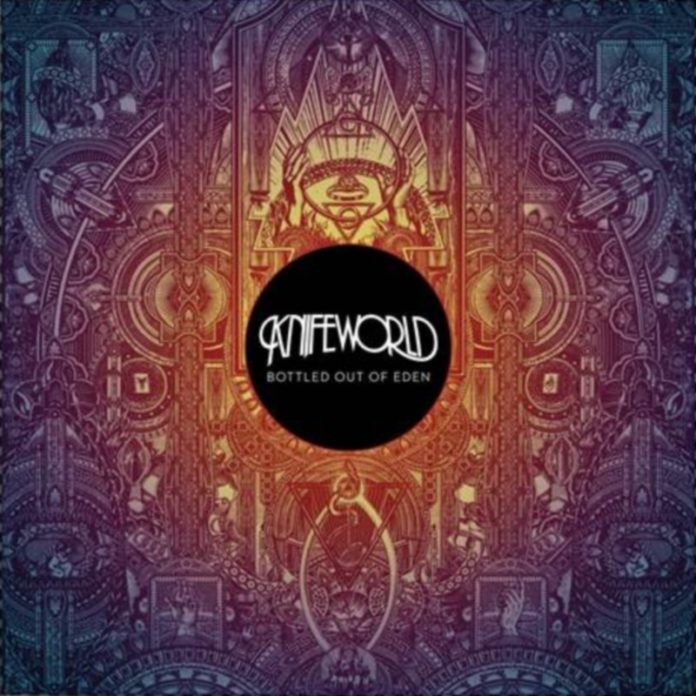 Bottled Out of Eden is the third album to come from UK band Knifeworld since the release of Buried Alone: Tales of Crushing Defeat back in 2009. This new one is, according to release press, built around ideas of cherishing loved ones and regretting their loss, a premise which is always a bit dicey in terms of avoiding hokiness. Happily, the band places more emphasis on the musical arrangements than on having emotive wailing dominate the songs, so many of the subject’s usual pitfalls are neatly sidestepped.

Semi-proggy, semi-psychedelic, and significantly poppy in tone (though it has more in common with the ’60s type than modern pop), the music is practically hyperactive at times, jittering from one set of instruments into a drastically different line-up within moments, and throwing spangly guitar-work left and right over quirky minor touches. Amid all of the flash and flutter, the band free-handedly grafts on influence from countless other genres for quick tangents, throwing in a chop of jazzy counter-point here, some klezmer buoyancy there, sedate folksiness sprinkled in, and so on.

For the most part, it gels together pretty well, mainly by virtue of not dragging any particular part on for too long. Those parts which do make use of extended melodies tend to be less jam-packed than the rest, providing a welcome rest from the manic clutter while emphasizing mood and emotion to a more effective degree. On the other hand, the kaleidoscopic nature of the music unsurprisingly makes for an album that can feel rather scatter-brained, though not to extreme detriment. Though the cohesion is low, that does open up opportunity to pick out particularly-enjoyed moments from the swirl of sounds, and there’s few times that feel as though they could have been cut outright without drastically throwing off the album’s momentum; additionally, the tendency towards nuttiness is worn away by the album’s second half, making it much easier to persist once you clear the initial blitz.

It’s certainly an odd album, but one with a respectable sense of purpose behind its dervish approach, and it certainly can’t be accused (honestly, at least) of being predictable. There’s also the need to hear it at least a half-dozen times before really being able to pin down the overall shape, and trying to pick out just how the band manages its flows from one twist of styles to the next is a game all its own. There’s a lot here in which Knifeworld can take pride in accomplishing, and those who are already fans should find plenty of stimulation in the details of this release.

IN A NUTSHELL
Fans of odd-ball alt rock/prog/psych will be delighted, technique appreciators will find a lot to mull over, and most others will likely find it weird but occasionally catchy
POSITIVES
Some really impressive synthesis of a wide range of styles
Complex arrangements
NEGATIVES
The sheer chipperness of some sections may make certain listeners feel as though they're slowly contracting diabetes
4