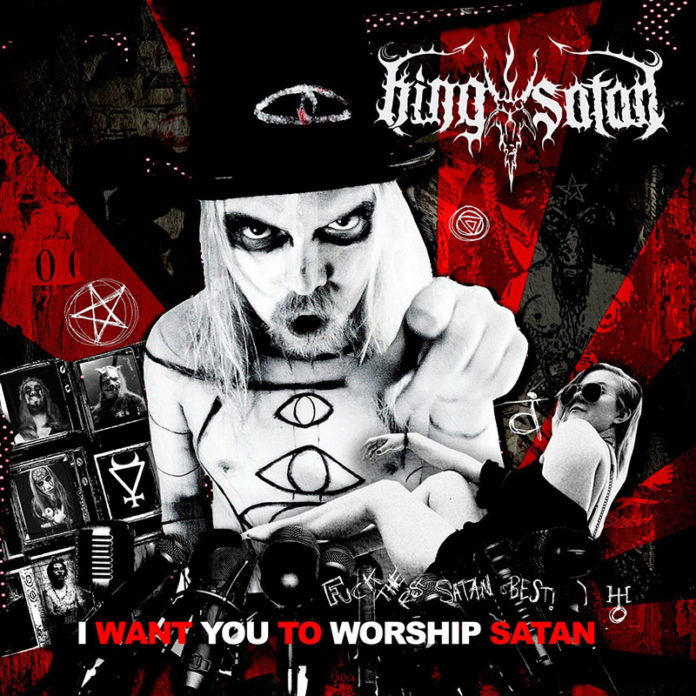 The art of filmmaking poses many challenges. Among them, how to quickly communicate to the audience the background of a character, without actually having to spell it all out in the dialogue. If a director wants to show that a someone is troubled, angsty and rebellious, for example, they’ll often just make them a fan of some fictitious metal band. More often than not, these bands are ridiculous, over-the-top, spewing outrageous barely-literate lyrics about violence and the devil, over a boring and incompetent music track. I’m pretty sure King Satan cites every single one of those bands as an influence.

The first problem that we encounter in I Want You to Worship Satan is that the music is simply terrible. It’s not that I was expecting, face-melting melodies in an industrial record, but I was certainly expecting more creativity than this. The melodies all sound like something put together in a hurry by a tired video game designer for the SNES. It’s all in a loop, and it’s all annoying. Sure, there are moments where you can tap your foot to the music, but most of the time it’s just boring. There’s really nothing there that justifies you sticking around for more.

The problems of the boring and repetitive music is only compounded by the absolutely terrible lyrics. They all sound like something written by an angsty 12 year old, who is desperately trying to add as many satanic and sexual references to scandalize their parents. The problem is that neither topic has been particularly scandalous in the western world for a good 20 years, and so listening to some poorly-growled lyrics about high school-level nihilism and satanism is more cringe-inducing than anything else.

Although I’m sure that King Satan can probably entertain a bunch of doped up goth kids wearing gas masks at a 3rd-tier music festival somewhere, it’ll require a lot of drugs. Regrettably for the band, any and all enjoyment of their music will disappear as soon as the drugs wear off.

King Satan – I Want You To Worship Satan
THE BOTTOM LINE
There are a lot of great industrial metal bands out there. King Satan aren't one of them.
POSITIVES
Some of the electronic beats are tolerable
NEGATIVES
Cringe-inducing lyrics
Boring melodies
1