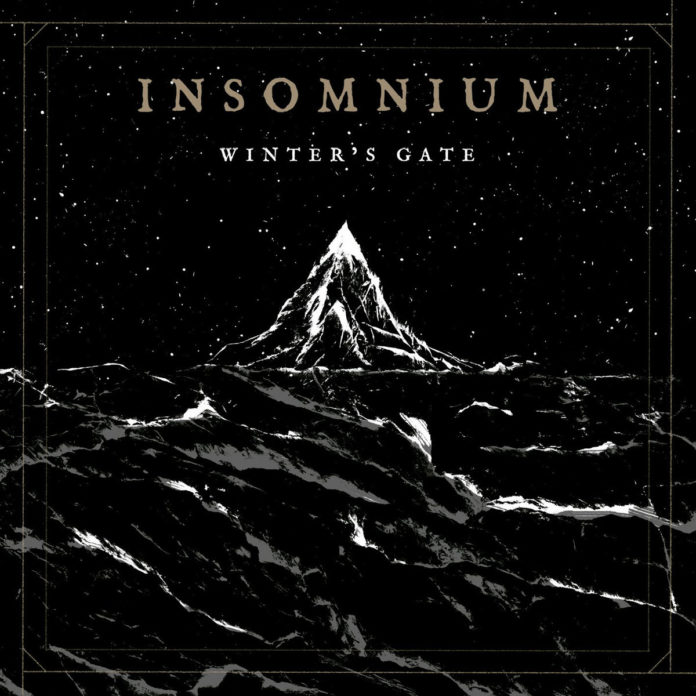 It’s been a couple of years since I last came across an album-length metal song. Lesbian‘s 2013 album Forestelevision and 2014’s Capture of Ziz by Qualeaceans are the most recent ones that come to mind.  With Winter’s Gate, Insomnium‘s seventh album (their third since parting ways with Candlelight Records), I’ve got another one to add to that short list of long stuff, though it took me some time to build up the needed patience for listening to it.

Once the music was rolling, the slow-building sound effects (thunder, distant rain, etc.) provided enough atmosphere to make for an easy slide into the experience.  Emergent guitar notes, slowly ringing and building in resonance, gave an early evocation of Ulver‘s “Silence Teaches You How To Sing”, soon supplanted by a more typical death metal furor. A high density of drum-beats and occasional forays into shredding territory, pick up the energy somewhat; at the same time, back-mixed choral elements enhance the grandiosity, with enough harsh growling present in the vocals to keep the brutal-needs kids happy.

Pleasingly, the single-slab format of the song proves to be more than an easy route to appearing epic, as the band circles around to revisit established melodies, mixing them with aspects from other sections for a semi-kaleidoscopic arrangement. Maybe this would have also worked in a segmented form, but it would have definitely lost some of the immediacy and momentum.

Unfortunately, for every minute that works, there are what, musically speaking, feels like three minutes of treading water.  While some of the bridges run through their paces with enthusiasm, others plod along without contributing much besides duration to the song’s workings.  It drags down the song, which is a shame, considering  that there’s so much hard work put into it.  They could have gotten away with trimming, compressing, or overlaying about twenty to twenty-five percent of the song, and while it does stick the final run’s landing pretty well, the traces of tedium leave their mark on post-song impressions.  As a show of the band’s capabilities, it’s a more than decent performance, but it’s not up to the level that would secure it a place alongside the likes of Dopesmoker and I in discussions about single-track albums that just nailed it.

IN A NUTSHELL
A respectable effort, but one which could have benefited from more prep time and sharper editing.
POSITIVES
Ambitious and sometimes even experimental in nature.
The less-loaded sections do a nice job with melancholic tone.
NEGATIVES
The parts which justify going the one-track route show up infrequently at best, leaving things feeling unbalanced and overly-padded.
4
Support the band (and US!) by purchasing their albums!
Amazon USAmazon UK