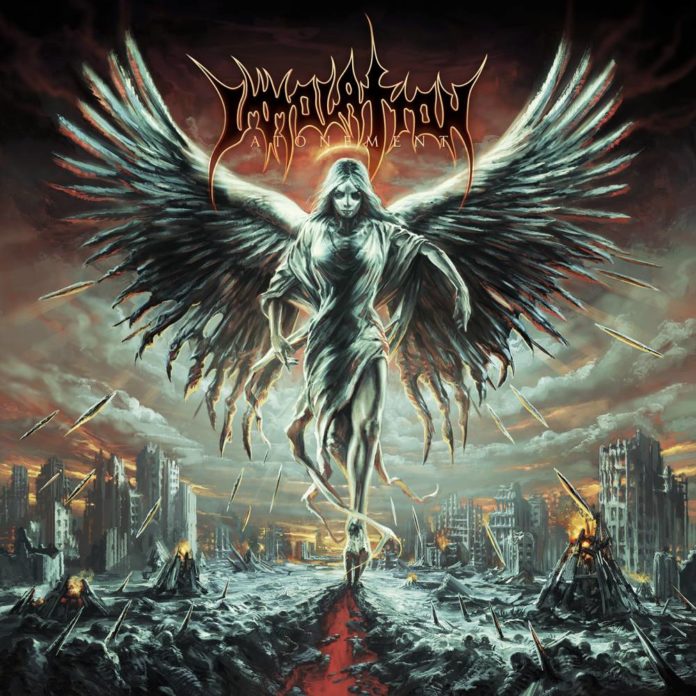 There are few bands in the death metal genre that can compare to Immolation in terms of balancing an unsettling atmosphere and technical prowess. Long-time guitarist Bob Vigna has written some of the most evil-sounding, off-kilter riffs in the history of the genre, while bassist/vocalist Ross Dolan has provided a rumbling low-end with his bass and guttural death growls. Alongside Incantation, Immolation helped put the New York death metal scene on the map, and have influenced countless bands with their technical, brutal brand of death metal. As the band rapidly approaches their 30th year of existence, rather than resting on their laurels, Immolation continue to push the boundaries of the sound they helped create, as can be heard on Atonement, their 10th full-length release.

The first thing that stands out on Atonement is the somber, atmospheric mood. While I’ve always considered Immolation records to be fairly moody releases, this latest record has a very gloomy tone. The opening one-two punch of “The Distorting Light” and “When The Jackals Come” quickly establish that unnerving tone I’ve come to expect from this band, with the dissonant chords clashing with the brutal, pummeling riffs. “The Distorting Light” has a pretty killer, old-school style breakdown, and is full of those Bob Vigna pinched harmonics we all know and love; the transition into “When The Jackals Come” is so smooth, and the songs complement each other so well, you almost don’t notice the change. It’s in the second half of “When The Jackals Come” that the tone takes a turn for the gloomy, with a slower rhythm and orchestrations that give the tune a gothic, doomy undertone. There are a number of moments throughout Atonement that sound like the death doom that Incantation are better known for, such as the crushing “Thrown To The Fire” and the super melancholy “Lower.” Immolation manages to approach this sound with a subtlety that allows for quick transitions between tempos that don’t come off as too jarring.

The drumming on Atonement has become much more focused than on previous efforts; Steve Shalaty is the band’s longest tenured drummer, and he has really scaled back his urge to hit everything all at once. Even when the music becomes a total speed-fest, like on “Rise The Heretics,” the band keeps a really tight, tidy tone, which gives the heavy riffs a harder impact, and gives the more chaotic moments a solid boundary, rather than letting the tunes fly off the rails. Ross Dolan and Bob Vigna have managed to keep the overall sound of Immolation pretty consistent, while still managing to experiment a bit, and push the genre in new directions. Alex Bouks, their newest member, manages to jump right in without missing a bit, which is just as much a testament to his ability as a guitarist as it is to the strength of Vigna and Dolan’s writing abilities.

The production on Atonement captures the chaos, rage, and gloom of the music extremely well, with the instruments receiving boosts in volume in the more brutal moments, while getting a little reverb in the moodier sections. The complicated, atmospheric nature of this music could be a difficult thing to capture, but I must say Paul Orofino (producer) and Zack Ohren (mixing and mastering), have done a fantastic job. Atonement is destined to be a classic, not just in Immolation’s discography, but in the death metal genre as a whole; younger bands should take notes, THIS is how death metal is done.

Immolation - Atonement
Brutal, chaotic riffs that transition smoothly into moodier, doomy riffs
Very tight, focused performance from every member of the band
Excellent production that perfectly captures the mood of the music
Not a blessed thing, unless you don't like complexity and thoughtful arrangements in your death metal
5