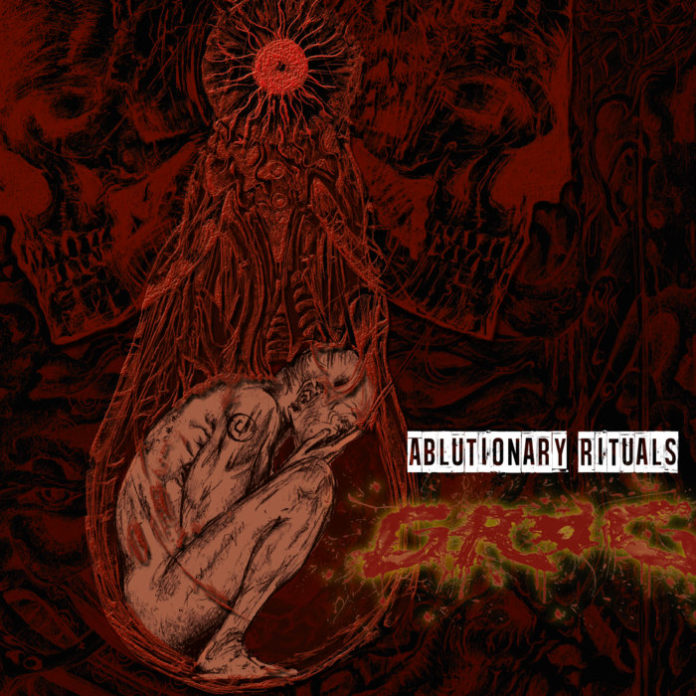 Doing anything for 25 years is no small feat, but delivering brutal, grinding death metal (with no signs of slowing down or softening) for that amount of time is pretty impressive. Portugal’s Grog have been doing exactly that, since forming in 1991 and establishing themselves as an underground force to be reckoned with in the brutal death and grindcore scene.

Ablutionary Rituals, the band’s latest release, sounds every bit as aggressive as their early releases, with a notable maturity in songwriting and musicianship. The music is crushingly heavy, with a good mix of dynamic changes in tone, and speed; at times, the music is frantic and chaotic similar to early Cattle Decapitation, while there are also sections that slow things down a bit to a nightmarish, sludgy crawl, as can be heard on “Katharsis – The Cortex of Doom and Left Hand Moon.” Grog transition between these sounds with ease, often in the same song, with “Cardiaxe” being a great example of this. There are a lot of great riffs throughout each song, with each one sticking around long enough to be memorable without overstaying its welcome.

Ablutionary Rituals is a pretty excellent slab of brutal death metal, with some solid, memorable tunes. The production, for the most part, is pretty great as well, with plenty of volume for each instrument. There’s a bit of reverb thrown into the mix, which adds atmosphere to the slower moments, but unfortunately muddies the audio up when the band is going full-speed ahead. With the reverb turned up, the cymbals add a bit too much of a hiss in the audio, which makes some of the riffs and vocals difficult to hear. Overall, though, Grog have crafted a record that would make any band proud, and is a high point in their lengthy career. If you like brutal, grindcore influenced death metal, give Ablutionary Rituals a spin.