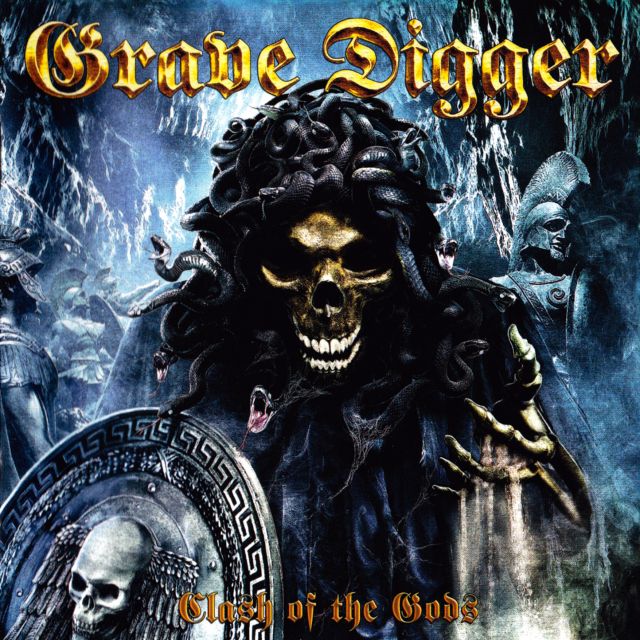 Recently I came across Grave Digger‘s new EP, Home at Last, and I must say the title track quite intrigued me. To be honest, I have lost much of my interest for this band after the amazing “The Last Supper” album, which came out back in 2005. The following records, although good, just couldn’t match the power and the emotion of that release. After hearing Home at Last however, I eagerly anticipated the release of the band’s sixteenth LP, entitled “Clash of the Gods.”

As the title implies the album deals with Ancient Greek mythology, a recurring theme in heavy metal. Whether the heroic journey of Odysseus or the grand battle between the Gods and the Titans, Greek mythology always had the epic feel to it, and epic themes and heavy metal always had a special connection. Grave Digger is no stranger to such themes, and this time they chose to shift their focus from England and Scotland to Ancient Greece and Troy.

Although I approached this album with a certain dose of skepticism, the end result is evident within the first few seconds of the album. A folk-inspired accordion melody and ghostly chanting in German immediately caught my attention. The opening track, God of Terror is the culmination of the fantastic opening – a guitar driven heavy tune bought me right away. The album is versatile, and besides the traditional intro, it is packed with exotic moments, such as the eerie introduction to “Medusa” or the sitar overture and the Orient-inspired melody of the title track. The tiny details that make my skin crawl, such as the beautiful acoustic guitar during the even more enchanting chorus of Walls of Sorrow, or the haunting keyboards in Hell Dog are all present, and well-produced. Heavy metal maniacs won’t be disappointed as well, for the album features some instant heavy classics, such as Death Angel and the Grave Digger, Warrior’s Revenge or the first single, Home at Last. The biggest surprise on the album is definitely the power-ballad, “Call of the Sirens,” and I don’t know whether it’s the amazing keyboards, the outstanding clean vocals or the feeling the song carries, but I feel this is the best mid-tempo track the band has recorded since Crucified (again, off of The Last Supper).

I would, once again, like to praise Axel Ritt‘s amazing guitar skills, which are one of the keys to this album’s outstanding sound. His is a virtuoso in every manner of speaking. The keyboards, although subtle, spice up the entire album even further. Chris‘ vocals are as remarkable as they have ever been, and the overall performance is worthy of the label of heavy metal titans Grave Digger surely are.

All those who put Grave Digger aside will surely be surprised when they hear “Clash of the Gods.” The band has once again pulled a card out of their sleeve and recorded an amazingly fresh and musically remarkable album that will surely turn many heads.

Smiling Back at Death: An Interview with Grave Digger | Metal Blast!

[…] metal topics. What caused this change? Chris: We did a lot of history stuff before, but after Clash of the Gods we felt exhausted with all of these concept releases. I told the guys that I wanted to do like we […]

Sanzu – Heavy Over The Home