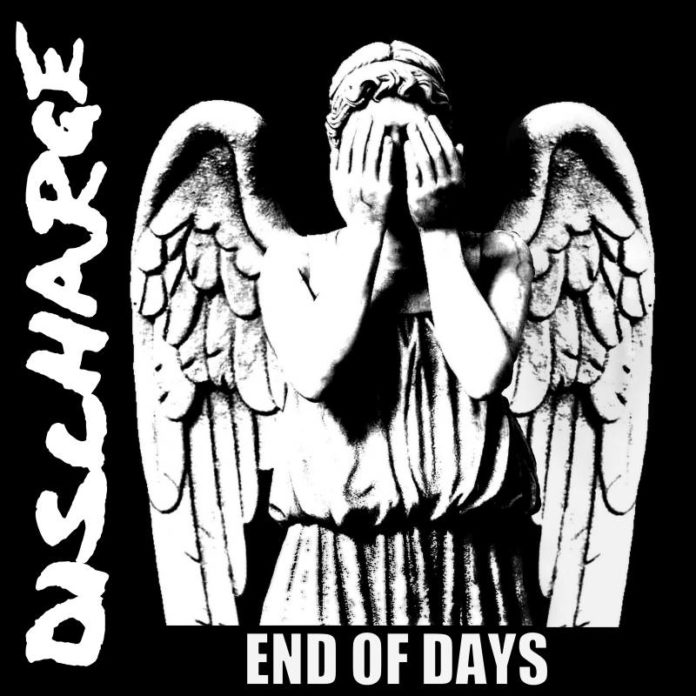 The influence Discharge have had on extreme music couldn’t possibly be overstated; Metallica, Slayer, Napalm Death, and Repulsion have all listed them as a major influence. That’s just the tip of the iceberg though, considering that there’s an entire sub-genre of hardcore named after Discharge’s distinctive drumming style (d-beat, in case you were wondering). Despite being plagued by numerous line-up changes, they have managed to stay relevant and influential, and have pumped out a pretty impressive discography. Their latest incarnation features 3 of the founding members, Rainy (bass), Tezz (guitar), and Bones (guitar), with JJ from Broken Bones on vocals, and Dave Caution (also of Broken Bones) on drums.

End Of Days  showcases everything about the band that has earned them their legendary status. The guitar work is fast and brutal, that famous d-beat drumming pattern is in full effect, and the vocals are a gruff, angry bark. Opening track “New World Order” is a fast, thrashy number that never lets up on speed and aggressiveness, setting the pace for the rest of the album. With tracks like “End Of Days,” “Hung Drawn and Quartered,” and “Raped and Pillaged,” it’s not difficult to see why Metallica cite them as an influence. The songs are short, violent bursts of punk rock fury, brimming with an energy that belies the band’s nearly 40 years of existence. Even when things are slowed down a bit (relatively speaking) on “The Broken Law,” there’s a real sense of menace and sincerity in the tone.

Like a lot of hardcore punk records, there isn’t a whole lot of melody to be had here, though that’s never really been Discharge’s M.O. anyway. The mixing and mastering are excellent, with plenty of clarity, allowing each instrument to shine while avoiding overpowering any of the others. The overdubs are fairly minimal, or mixed in so well that they aren’t noticeable, giving this album an almost “live” sound, which is actually perfect for a punk record. Occasional bits of guitar feedback are left in, as can be heard on the opening riff for “Looking At Pictures of Genocide” which, again, gives the impression of a live record.

If you’ve never listened to Discharge before, but have heard all your favorite 80s thrash bands lavish them with praise, End Of Days is as good a place to start as any. Relentless from start to finish, this album firmly secures Discharge’s place as one of the most influential bands in the history of aggressive music, it overshadows anything being currently produced by any of the younger bands that are influenced by them. End Of Days is an instant classic, sounding as fresh and vital as when the band first started back in 1977, although aided by the collective years of experience from each member. Grab a copy today!

IN A NUTSHELL
Discharge, who have pioneered their own form of hardcore, show why they are still the masters with this latest release
POSITIVES
Fast and furious hardcore punk/thras
Eexcellent production
Solid performance from the band
NEGATIVES
Not much melody for people that want that sort of thing
5