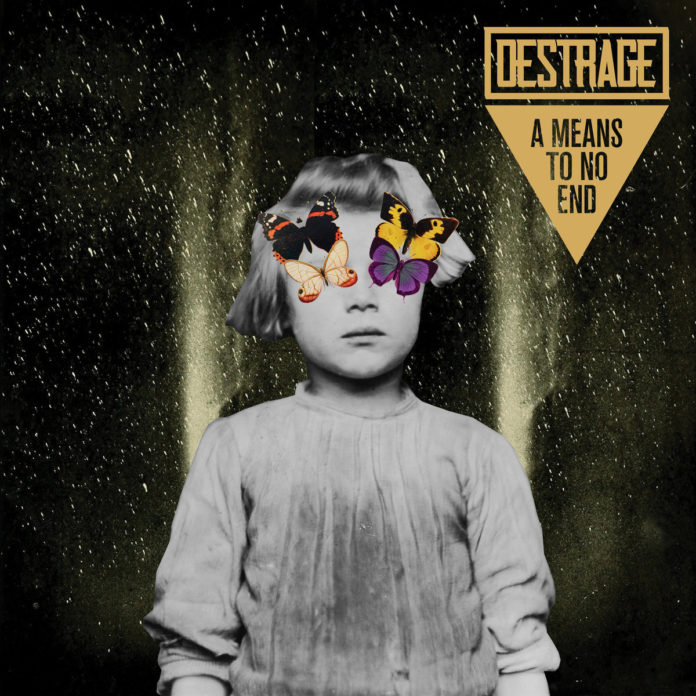 Destrage pride themselves on how difficult it is to label their music, boasting that they are in a category of their own. Although when it comes to variety in music I often say the more the better, but A Means to No End challenges the limits of my philosophy.

The album’s oddities jump out immediately with medieval acoustics that become distorted in a matter of minutes. The calm, “beginning-of-an-adventure” vibes are smashed apart by guitars in the bottom register and shouts etched with punk rasp. In many ways the music sounds like the offspring of a sonic orgy. Elements of thrash, folk, prog, melodeath, and mathcore stain the album’s DNA and force the question of how much is too much. The tracks feel as though they are in a constant state of implosion while Destrage work desperately to string it all back together. The whole production demonstrates a severe loss of focus due to the incorporation of too many elements. Rather than excite with dynamic flavours, the music runs flat as it competes with its own designs. These flabby flat sections dangle from the performance and are just begging to be cut away.

On a whole, the album seems confused, but that doesn’t mean it lacks merits. While there are stretches of bland boredom, there are also peaks of entertainment. The hectic thrash sections brim with energy and seem like they would be exceptionally easy to mosh to (the intro to “The Flight” sounds like its straight out of Megadeth’s Peace Sells). Smooth passages that imitate progressive rock contrast with the chaos and are well-timed to provide much needed breathing room. The vocals use a combination of punk shouts, clean croons, and death growls without falling short in any of the styles. The styles are executed well-enough to stand out from the surrounding insanity.

A Means to No End is the poster child for the dangers of over-experimentation. On paper, smashing together numerous elements may seem like for the formula for success and innovation, but in practice it more frequently creates underwhelming explosions. With the huge amount of unique aspects that Destrage attempted to cram into their album, an exceptionally high degree of discipline is required. Unfortunately, this band fails to demonstrate that control. While the album is loaded with mistakes and questionable choices, it still has its strong points, and there are some gems of unique contrast that sparkle in the confusion. Destrage deserve recognition for mustering the courage to try something so ambitious, but the end product should have been polished much more.

IN A NUTSHELL
An intriguing jaunt through a large variety of musical styles tainted by an unclear musical direction.
Reader Rating0 Votes
POSITIVES
Adventurous application of styles
A number of sections that develop interest and energy
NEGATIVES
Confused performance
Useless sections that need to be trimmed
3