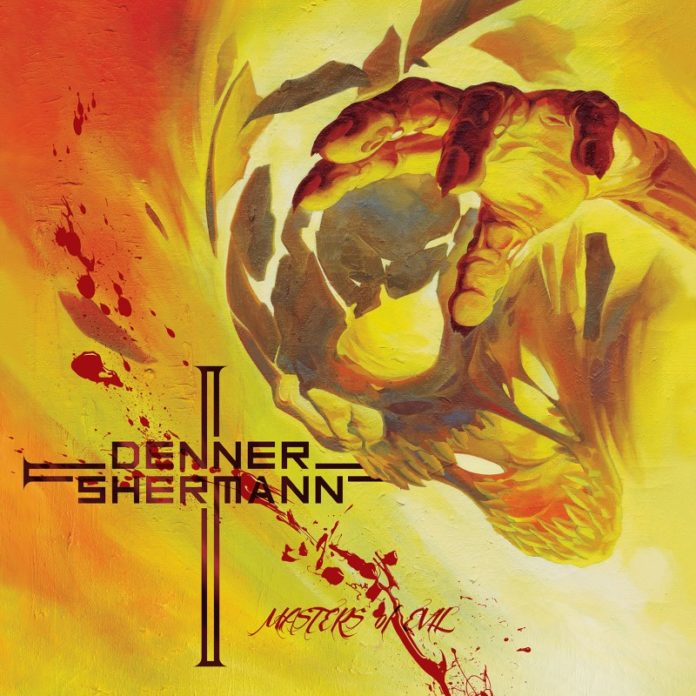 You may have caught the Satan’s Tomb EP from this duo of guitarists (sure, there are three other members in the band, but it’s all about the guitars, right?) last year, with which the Denner/Shermann combo made their debut. If you’re wondering why you should know the names, both of them have served on guitars in Mercyful Fate over the years, though now they’re teaming up with vocalist/lyricist Sean Peck, drummer Snowy Shaw, and bassist Marc Grabowski to do some retro heavy metal.

Keeping it trim (by today’s standards) at eight songs averaging out to around five minutes apiece, the group plays well, with solid riffs and song-writing. The problem, however, is that, apart from some slicker production, it’s just dredging the material of its inspiration without infusing any real innovations. Shredding solos from the guitars, fierce break-downs and twisty bridges from the drums, and full-bodied howls from Peck all come together in effective ways supported gamely by the bassist but, through all of it, the sense of rehashing is so pervasive that it kept me from being able to just go with the flow and appreciate what they were doing in its own right. If you want to hear more of what was being made when the Combat label was in its prime, then you’ll be well-served (and it’s practically impossible to effectively argue that these guys don’t know how to do that style), but the whole thing is so repetitive that it’s hard to get excited over the van-art lyrical themes and avoidance of stylistic experimentation.

True, it can be argued that virtually all sub-genres of metal are stagnant in their own ways, with just a tiny percentage from each doing their part to incorporate changes, or bring back old elements with a significant twist (unsurprisingly, it’s often the bands without pre-existing recognition who try their hardest in this regard). The issue here is that, based on what I hear in the music of Masters of Evil, that push to move past what’s already been done simply isn’t part of the drive behind this album. It’s the musical equivalent of comfort food; the first few bites let you know just what the rest will be like.

There’s definitely a market for this “comfort music,” and we all have times when we can sit down to something familiar and unchallenging; the problem is that it’s not easy to get excited about doing so. Trying to picture how this album would be marketed if it didn’t have the name recognition of Denner and Shermann (for what that’s worth), I can’t imagine the media exposure would be anywhere near what it is with their backing. At best, they’d probably be hoping to score enough of a throw-back appeal to feed the retro worship demographic and warrant a repress or two. As long as you recognize that you’re getting something that’s been served several hundred times before, you could probably go into this and have a good time (after all, these guys do play well), but anyone who’s expecting something new (and who has at least a passing knowledge of metal from before this decade) will be left wondering where the rest of the ingredients are.

IN A NUTSHELL
A nice call-back to the ways of the '80s, but unless (for some reason) you can only listen to bands that are still active, instead of digging through what was made by now-defunct bands, there's nothing here to get excited about.
POSITIVES
Good instrumental interplay
Strong vocal control
Something well-suited for metal Halloween music if Acid Witch doesn't meet your needed level of skill
NEGATIVES
Nothing new to offer in any way
3.5