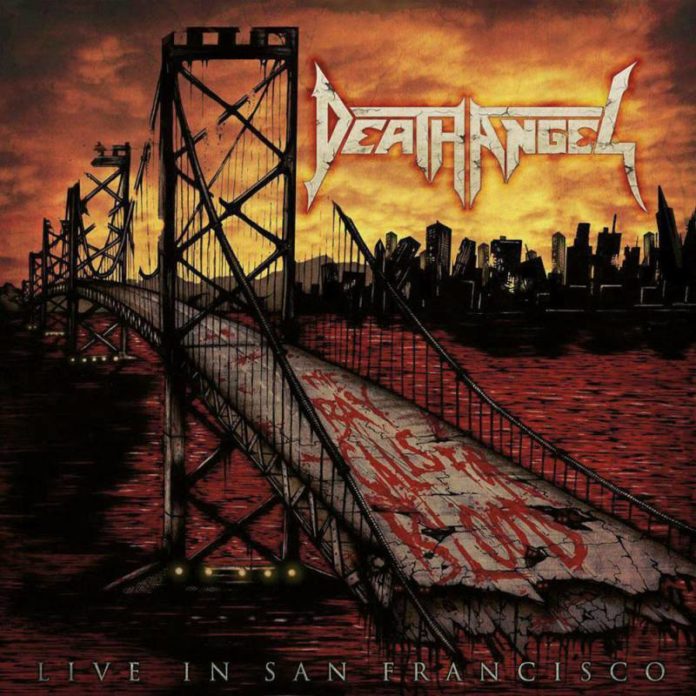 Death Angel are a great band. As someone who’s seen them live twice, I can also attest to the fact that they are a great LIVE band… and yet, for some reason, they just cannot come up with a live album that properly translates their power. Their first kick at the cat, 1990’s Fall from Grace, was mired by a terrible production on top of being a screw job by Enigma records (Death Angel having then just recently left them to sign with Geffen); then, 2009’s Sonic German Beatdown – Live in Germany, was at best a solid but unremarkable release that otherwise had the potential to be one of the best live albums in thrash. The Bay Calls for Blood, unfortunately, continues the trend by actually landing somewhere in the middle of the issues suffered by those two releases.

The performances on this record are, without a doubt, terrific.The whole band is, as they’ve been known to do over the last few years, absolutely slaying in their hometown. The guitar duo of Rob Cavestany and Ted Aguilar pound out riff after scorching riff, never letting up, never giving the audience or the listener a moment of respite. Mark Osegueda screams like a banshee through the whole set and proves that he is arguably the best vocalist of thrash’s old guard still playing today. Sadly, the mediocre production job rears its ugly head in both of those cases, damaging the whole experience. In the case of the guitars, at times I felt like the volume of the rhythm guitar would drop down sharply, which was incredibly distracting from what could have been some really incredible parts; the same happens in the case of Mark‘s vocals when he is hitting some of his higher notes, since the volume also drops drastically, leaving the whole thing sounding much more hollow than it should. These issues aren’t constant, but they are recurring, and it’s really discouraging to hear such great performances be wasted by not having a strong sonic workup.

The album’s other major flaw is in the set list. While the last two Death Angel releases were fantastic, I feel like dipping farther back in to the catalog would have given the release a little more flare and variety. Out of the 10 tracks, 8 are from the last two albums, and only one is pre-Art of Dying. I’m not saying there should be more “Hits” or classic songs, but even some older, deep album cuts like “Road Mutants” or “Spirit” could have livened things up and added some light and shade to the record.

The Bay Calls for Blood is still a good release that should please any Death Angel fan. It’s definitely worth your time and hard-earned cash, since they are, without a doubt, one of the best old guard thrash bands still alive in the 21st century. Good does not mean perfect though, and if just a few things had been different then this album could have been something very very special.

IN A NUTSHELL
Still a worthy addition to your collection if you're a fan of the band, but definitely doesn't live up to the potential that it has.
POSITIVES
Great performances all around
Mark Osegueda continues to show that he is one the best vocalist of thrash's old guard still in the business.
NEGATIVES
The whole affair is sabotaged by mediocre
The set list is in dire need of more variety.
Uninspired production

Paradox – Tales of the Weird