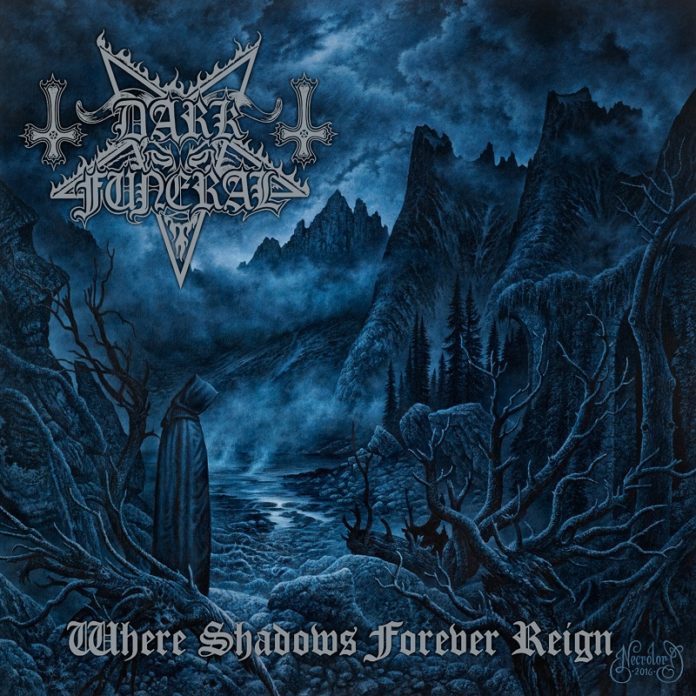 Dark Funeral are a long-running band (coming up on a quarter of a century of existence) with a lot of history and personnel changes to their name. Because of this I think that I should contextualize this review by admitting that I hadn’t heard any of their albums before. Still, there’s a chance that a high school friend might have played some for me without identifying them. So, for the devoted fans who would be wondering why I seem so uninformed about that history when discussing Dark Funeral‘s latest release, there’s your reason.

That being said, the band comes off in a strong light with this album, balancing essential viciousness with melodic development and a complexity of arrangements that allows for grand flourishes without losing its edges to theatrics. Strident guitar tones provide an effective contrast to the murkier bass presence, and the drummer displays skill in bashing things to Hell or going for more technical ripplings of percussion. Vocally, things are pretty standard, with rasping growls and gnashings of sacrificial syllables, though I did find the evident effort to keep words fairly legible an unexpected touch of kindness on the band’s part. All of these elements are brought together with a mixing that keeps things well-balanced, though it did feel as though some sharper jags in the treble end could have helped heighten the violent projection.

There’s also a sense that (drummer aside) the speed isn’t as rampage-inclined as it could be, though given that the fastest BM I tend to come across is usually from bands which exhaust themselves after one album or just a couple of demos, it makes sense that a band which has been around this long knows to keep things in the realm of on-stage playability. And with the tracks which play in the slower reaches of black metal tempos (“As I Ascend”, for instance, and “The Eternal Eclipse”, which briefly flirts with incorporating some doom elements), Dark Funeral bring enough thunder to bear that it generally feels like a fair trade.

While I can’t speak to how established fans will receive this new album (the band’s first since 2009’s Angelus Exuro Pro Eternus), it left me impressed. New vocalist Heljarmadr puts in strong work, returning drummer Dominator plays his ass off, Chaq Mol‘s guitar-work cuts sharp but not overly clean, and Lord Ahriman‘s switch over to bass duties, though rarely ear-catching, does an effective job of meshing with the other instruments to facilitate their dark tunes. The most overt negative point may be the relative abruptness of the final song, which comes in without much fanfare and finishes similarly. Despite that, there’s enough hooks and sharp riffs built in advance that there will likely be some part of the album caught on loop in the back of your mind after finishing it. Not exactly spectacular, but far beyond adequate.

IN A NUTSHELL
A workhorse of a black metal album, one that will likely hold up well to repeated listenings and future releases
POSITIVES
Good balance between the instrumental presence, the vocal dirtiness, and the song-writing ornamentation.
NEGATIVES
Production may be too slick for some black metal tastes
Not much escalation to the final track
4