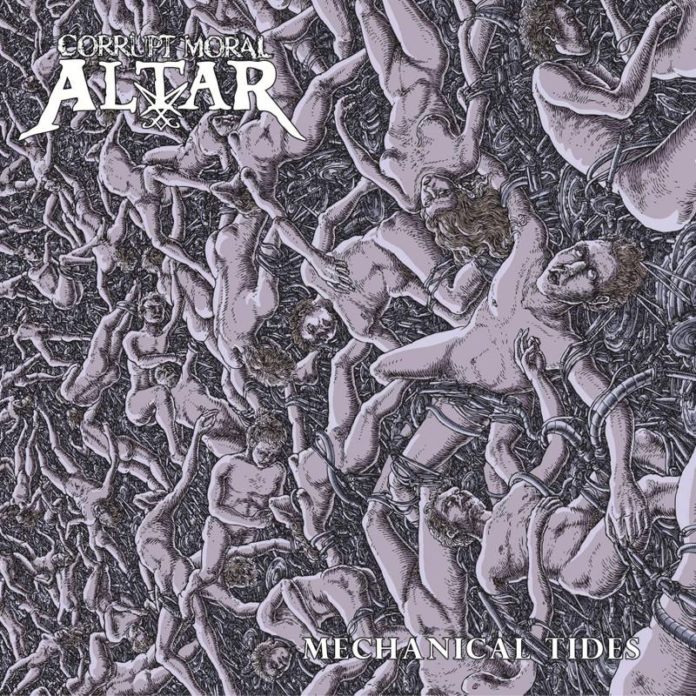 The UK hardcore scene is seriously stepping up its game right now. Formerly thriving off its own self-sufficient success, tons of great UKHC bands are now finding fame all across the globe. Following on such bands as Plaids, Baby Godzilla and Bastions, Liverpool’s Corrupt Moral Altar are the latest collective of troubled young delinquents to deliver a firm ‘fuck you’ to anyone who says the UKHC scene died out long ago. Riding on the wave of universal acclaim from their excellent 7” Whiskey Sierra last year, Corrupt Moral Altar kicks it into high gear with their debut full-length Mechanical Tides on Season of Mist.

It’s easy to pin down Corrupt Moral Altar‘s sound as simply ‘grindcore’ (especially when you have Jeff Walker from Carcass doing guest vocals on one of their songs, holy shit) but the sheer breadth of styles on Mechanical Tides is much too vast to categorise. It rocks the distinctive bassy grind of UK hardcore, but infused with the schizo sprint of east-coast powerviolence. It channels more niche influences too, like stoner hardcore in the vein of Burning Love and Boris, and the light touch of harsh noise raises a glass to Man Is The Bastard. For a genre that’s mostly self-contained, it’s not surprising or uncommon to see bands wearing their influences on their sleeves; in fact, CMA wear their influences all over their sleeves (they might as well have a Napalm Death face tat), but unlike other hero-worshipping hardcore bands they’ve developed and evolved rather than stagnate with a copyist sound.

With all the genres on display, you’d think Mechanical Tides would be an absolute clusterfuck to listen to, but it makes for one of the most entertaining hardcore records of the year (a noble accomplishment for a record that’s twice the length of your average punk release). Each song has its own identity, and constantly evolves and throws curveballs at the listener. ‘Father Tongue’ begins with a bludgeoning tempest of blast beats and by the end, it’s a gang-chanting mosh anthem. It’s not just a forty-minute slugfest, it keeps you gripped all the way. Having such an ambitious fusion of styles can be a big ask for a band’s musicians, but luckily CMA have the talent to pull it off. One of the most striking things about the record is the hugely passionate performances of vocalist Chris Reese, whose throat-piercing highs and intense gutturals echo a fusion of Jeromes Dream and Nails. Seriously, when combined with the bleak instrumentals, there at times at which the vocals are absolutely terrifying. The kind of stuff Reese shoots for on this album could tear apart the dude’s vocal chords like tissue paper, but it’s all for the sake of art, and it’s jaw-dropping.

The grim, tortured atmosphere of the album doesn’t feel like a performance, it feels like the band is actually living it. Corrupt Moral Altar have crafted something special here. A hellish, decadent synthesis of all the transgressive and extreme elements of hardcore, and it makes for one of the most exciting debuts of the past few years… acting as the sonic equivalent of being dragged backwards through a field of glass.