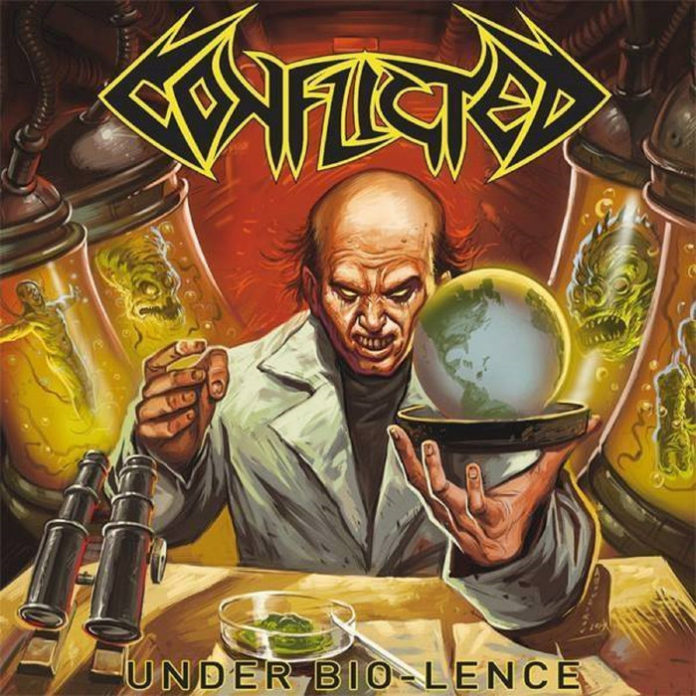 Chilean Thrashers Conflicted have returned with their sophomore full length, and it is really a great example of why, in 2015, creating truly outstanding thrash metal requires more than just making a fun, consistent album. While Under Bio-lence is exactly that, fun and consistent, with bands like Toxic Holocaust and Municipal Waste out there tearing it up, not to mention old guard acts like Exodus and Overkill writing their strongest albums in decades, being a simply good thrash band isn’t enough to rise above the pit any more.

Conflicted’s songs are eminently moshable, well-constructed, and never dull, but that doesn’t keep it from feeling a bit paint-by-numbers. It’s like mid-years Municipal Waste (see: Art of Partying) with less punk and more shouty-shout vocals reminiscent of Machine Head’s Robb Flynn and more noodly, Hammett-esque lead work. It’s a mash-up of a bunch of ideas that have been done before and done a lot.

There are stand-out moments, however. “Neuronal Riots” has a great sense of groove and some of the best thrash riffs I’ve heard this year. While it may not be to everyone’s liking, the rawness of the production is refreshing in the face of a thrash scene that, in many respects, has lost a lot of the punishing lack of restraint in the studio that made many older thrash albums the classics they are. Would Darkness Descends be the classic it is held up as if it were produced to crystal-clear perfection, Andy Sneap-style? I think not.

In the end, Under Bio-lence is a good thrash album. Have I heard better in recent years? Absolutely, but Conflicted have created a document that is consistent, never boring, and guaranteed to get any thrasher’s blood pumping. Sometimes, that’s enough.