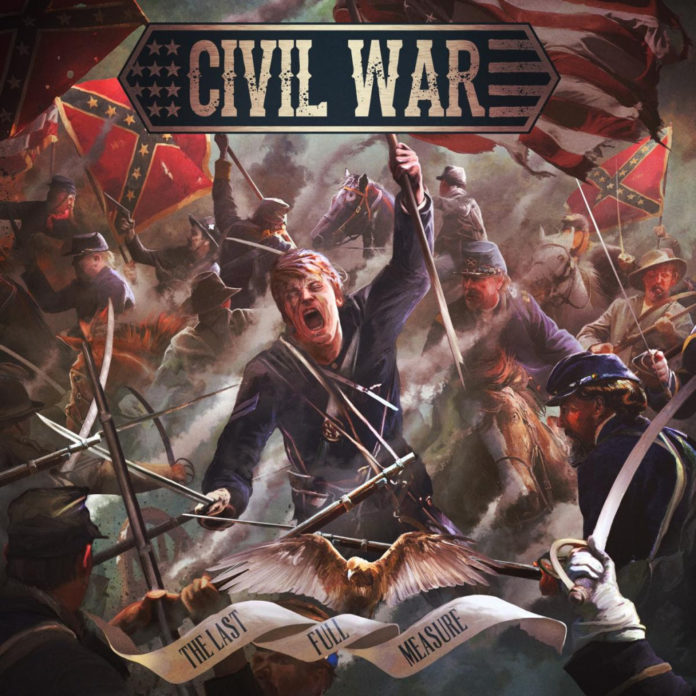 Back in 2012, beloved Swedish power metal outfit Sabaton shocked everyone as all of their members, apart from vocalist Joakim and bassist Pär, would be parting ways. While Sabaton carried on (albeit in a very different form), guitarists Oskar Montelius and Rikard Sundén, drummer Daniel Mullback, and keyboardist Daniel Mÿhr (the departed members) quickly formed a second band called Civil War. Enlisting Astral Doors vocalist Nils Johansson and bassist Stefan Erikkson, the band quickly began recording new material. After releasing a self-titled EP and a full-length (the excellent Killer Angels), the band saw the release of just one more album, Gods And Generals, before founding guitarist Oskar and bassist Stefan left the band.

In The Last Full Measure Civil War sound just as strong, despite the lineup change. The keyboards are as symphonic as ever, the guitars are fast and heavy, the drums pound as hard as cannon fire, and Nils Johansson’s vocals soar majestically over the music. As was the case with Sabaton, I find it interesting that Civil War are able to use so much keys/synths in their music, and yet keep such a heavy edge. “Road To Victory,” for example, opens with some electronica-styled synthesizers, but goes into into overdrive as the guitars kick in and the music takes on a speed-metal feel that would have any heavy metal junky banging his head. “Gladiator” is another relentlessly heavy tune, with some of the fastest guitar playing on the record, and even though the keys are a little less prominent in the mix, they’re still a vital part of the tone, particularly on the chorus. As is the case with much of the power metal genre, the music here sounds absolutely larger than life, especially on the choruses, which often sound like Nils has a choir singing along with him in the background.

Lyrically, Civil War don’t stray too far from their historical combat approach, though there are occasional forays into other topics. “Gangs of New York,” for instance, explores the turf wars in early New York, as immortalized by the film of the same name. “Tombstone” is based on the events covered in the film of the same name, particularly the gun fight at the O.K. Corral. While the music on “Gangs of New York” is pretty standard, mid-tempo type power metal, Civil War decided to experiment a little with “Tombstone,” and though there are some great riffs, the experiment can’t be called a complete success. Falling somewhere between polka music and a cartoonish version of a spaghetti western soundtrack, “Tombstone” comes off a bit cheesy, and unintentionally humorous. This is really the only misstep on The Last Full Measure, however, as the rest of the record is a power metal masterpiece.

The mixing and mastering is superb, with each instrument given equal footing in the mix; though there are plenty of keyboards adding a layer of melody, the impact of the drums and crunch of the guitars can still be heard easily. Though it’s easy to make comparisons to Sabaton, with The Last Full Measure Civil War continue to create their own legacy, and making a real name for themselves. If you like your power metal heavy, with a good dose of melodic keyboards/synths in the mix, it’s difficult to find a better band than Civil War to recommend.