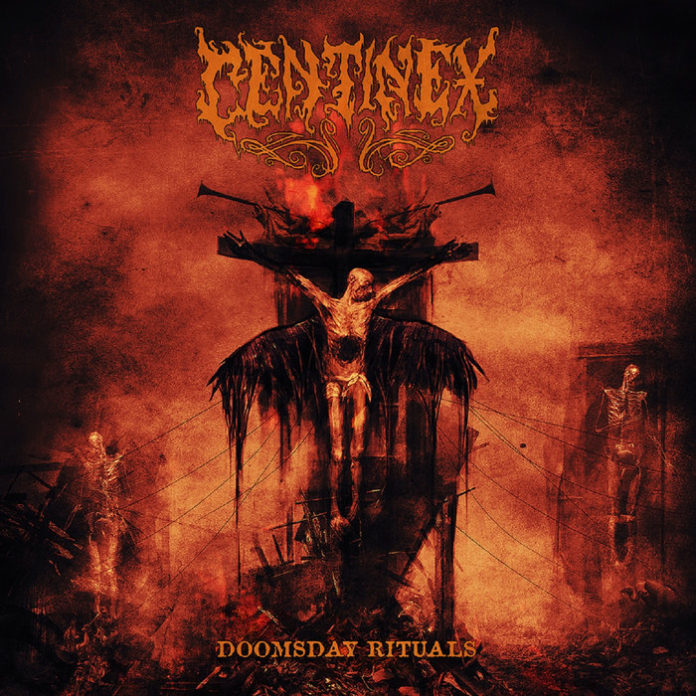 Doomsday Rituals is Centinex‘s tenth album as a band, and their first since returning from a decade-long in 2014.  Sporting a new line-up with members from Demonical and October Tide joining returning Centinex drummer Kennet Englund, the Swedish group brings about half an hour of new tunes to bear, and while it doesn’t really wow, they’re in good form and good spirits anyway.

With a history stretching back to 1990, it’s unsurprising that the group plays with a thoroughly old-school basis to their death metal, but there are numerous places in which they’ve updated their sound to draw in new listeners.  The most immediately evident area of this would be the production, as everything has a nice balance between grit and sheen; at the same time, the drums, vocals, bass, and guitar all take shifts between old and new mindsets and, happily enough, pull it off as a clean mix instead of muddled squishings.  Hard rolling beats, steady guitar growl, and thickly-barked growls provide a reliable set of consistencies to the songs, with change-ups in rhythms more common than tempo variance.

While it never gets all that vicious or violent with the music, it’s not a bad album with which to make a return, and the nods to old roots put in enough respect to where the group came from that they should be able to get away with some experimentation next time around.  The members show a more-than-passable solidity in working together, and the feedback from this release should give them further ideas of how to develop their songs in the future. Still a few cobwebs to be wiped clear, but a promising restart on the whole.