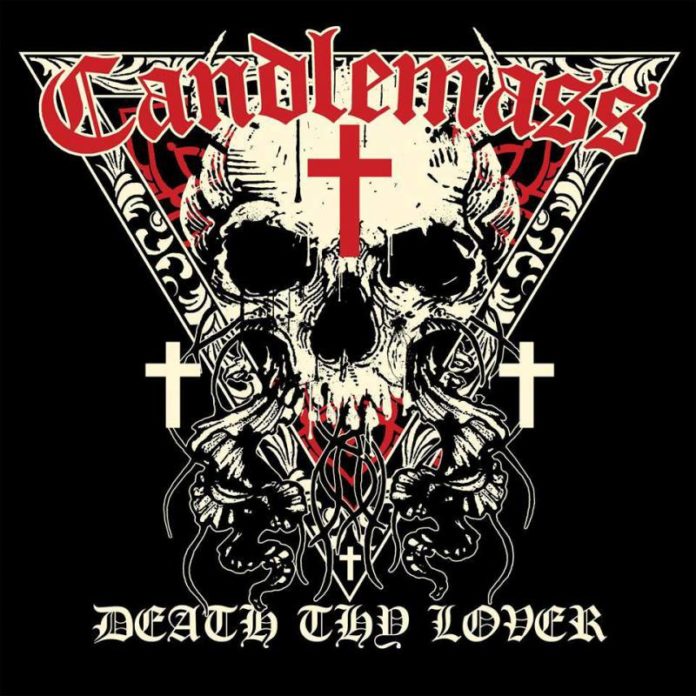 This year marks the 30th anniversary of arguably one of the greatest metal albums of all time, Epicus Doomicus Metallicus by Sweden’s Candlemass. The use of operatic vocals over slow, heavy riffs left many scratching their heads, but helped give birth to an entirely new sub-genre: doom metal. After a long run, marked by numerous line-up changes and a brief hiatus, it looked like Candlemass were set to throw in the towel after the release of Psalms for the Dead. Although they picked up Mats Levén to fill in for departed vocalist Rob Lowe, and played several more shows, it looked like the end for the band, and there was much weeping and gnashing of teeth. So, imagine my surprise when it was revealed that the Swedish doom gods announced the release of a new EP.

Death Thy Lover shows that Candlemass aren’t quite as done as we were all lead to believe; indeed, this EP shows every bit as much vitality as the band’s early releases. “New” vocalist Mats Levén now has his first official release with the band, though his vocals can be heard in some demo sessions for Candlemass and King Of The Grey Islands. Any skepticism about the band using yet ANOTHER lead vocalist can be set aside immediately upon hearing opening track “Death Thy Lover,” however, with some sinister crooning over the band’s trademark crushing riffs. For those that aren’t familiar, Mats is no stranger to the metal underground, having put in time with Therion, Krux, Abstrakt Algebra, and Yngwie Malmsteen, to name a few of his previous outfits. His vocal range is pretty impressive, going from the aforementioned croon to a higher register similar to that of Robert Lowe, though with a little grittier rock and roll attitude.

Bass player/main songwriter/de facto bandleader Leif Edling proves himself to be perfectly capable of creating classic-sounding tunes without coming off as a simple rehashing of old ideas. “Sinister N Sweet,” for instance, has some killer riffs that would even have Tony Iommi going “shit, why didn’t I think of that?” The tone throughout Death Thy Lover is vintage Candlemass, with equal parts crushing Black Sabbath-worthy riffs and melancholy, gothic moments of beauty. The title track even has a few moments that have a more rock and roll feel to them, similar to Edling’s newer band, Avatarium.

The epic feel fans have come to expect from Candlemass is in full effect on Death Thy Lover, thanks to the excellent production. “The Goose” benefits from a boost in volume for the guitars, bringing the focus (rightly so) on the power of the riff, which will have many doom fans raising approving eyebrows and fists. There are plenty of overdubs throughout the record, but these are mixed so well that you never really lose any clarity.

For a band that seemed to be ready to call it a day, Death Thy Lover certainly feels like the beginning of a new chapter for Candlemass, giving us longtime fans much to look forward to.

IN A NUTSHELL
Candlemass haven't quite finished yet, and this EP shows that they are still the masters of doom metal
POSITIVES
Crushing riffs
Soaring vocals
Excellent production
NEGATIVES
Only 4 songs
4.5