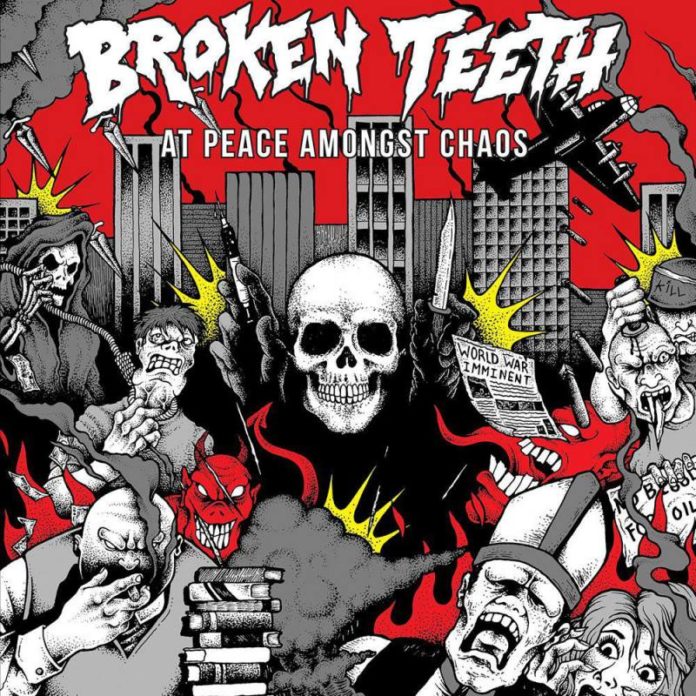 In the early 2000’s, metalcore saw a pretty big breakthrough, with bands like Killswitch Engage, As I Lay Dying, Shadows Fall, and Unearth hitting all the major summertime touring circuits. At that time you had to have a lead-guitarist throwing down face melting solos, lots of melody, and a vocalist that could switch back and forth between harsh and clean vocals seamlessly. If, God forbid, you didn’t have those things, you weren’t a marketable band. All of this had the effect of allowing some pretty mediocre bands get a lot of exposure, while keeping some great hardcore bands from seeing the success they deserved. Enter Manchester’s Broken Teeth HC; formed in 2007, they play no frills, classic metallic hardcore in the vein of Hatebreed and Terror. No melodic choruses, no sweep-picking, and no fashion model-esque photoshoots, just brash, angry hardcore.

Broken Teeth HC’s latest offering, At Peace Amongst Chaos, begins things on opening track “Take Me Away” with a hypnotic acoustic guitar lick, which, accompanied by some eerie synthesizers. This doesn’t last very long though, with some heavy riffing that reminds me of vintage Hatebreed, as well as barked vocals and a shout-along chorus. There’s little experimentation on the rest of the album, though that’s not necessarily a bad thing, since the formula Broken Teeth HC use in their songwriting is tried and true. The band makes no bones about being a hardcore band, choosing to stick to their guns and, I must say, this is actually pretty refreshing.

What you get on At Peace Amongst Chaos isn’t trendy, it’s not super flashy in the technical musicianship department, and that is totally the point. Though you’ve probably heard a lot of similar riffs on a lot of similar sounding hardcore records, there’s no denying the sincerity in Broken Teeth HC’s attitude here. They play exactly the kind of hardcore that they grew up with, and don’t give a fuck if it’s not pretty sounding enough for the Warped Tour crowd, and aren’t interested in keeping up with the trends. Thrashy numbers like “Nothing Like You” and “Prove You Wrong” get the blood pumping, while more mid-paced songs like “Lose My Grip” provide a great soundtrack for the circle pit.

The production on At Peace Amongst Chaos is pretty much par for the course; the guitars and drums are given the most volume in the mix, and the vocals are loud and clear, with a slight reverb added in. The bass could have used a little more boost but, for the most part, the riffs are meaty enough to stand on their own. The intro on “Take Me Away,” and which I mentioned earlier, feels a bit out place and unnecessary, but the metallic assault that quickly follows it up all but erases that synthesizer from memory. With that intro being the extent of the experimentation on the record, though, hardcore fans shouldn’t be deterred in the slightest. Broken Teeth HC have crafted a pretty enjoyable record, and though it doesn’t do a whole lot to distinguish itself from most of the other metallic hardcore albums I grew up with, it’s still nice to know there are bands that like to play traditional sounding hardcore.

IN A NUTSHELL
Traditional metallic hardcore brought to you all the way from Manchester
POSITIVES
Some great, no frills hardcore riffs designed to stir up some intense mosh pits
NEGATIVES
The intro seems a bit out of place compared to the rest of the album, a little formulaic
3.5