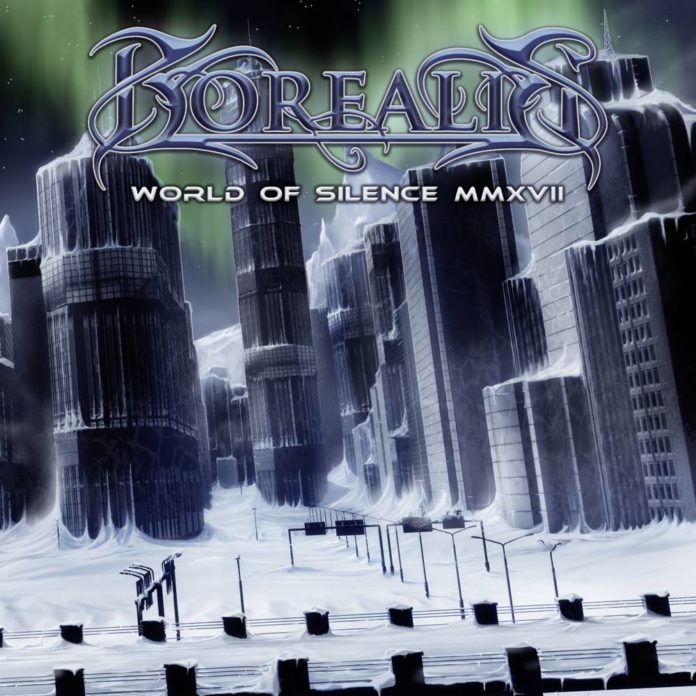 When I see that an album is a rerecorded and remastered version of a previously released record, I am, admittedly, a little hesitant about checking it out. Dimmu Borgir’s Stormblast, and Exodus’ Let There Be Blood are two primary examples of why, as both of them were much less satisfying than their original incarnations (while Dimmu Borgir‘s managed to be decent, although it lost much of its original atmosphere, Exodus‘ was just an atrocity). I understand why bands do this (maybe they hit a milestone in their careers or they graduated to a major label), but sometimes it leads to tarnishing their original efforts. I’m glad to say that this is not the case with World of Silence MMXVII, the rerecorded version of Canadian progressive power metal outfit Borealis’ debut full-length.

Borealis play a heavy, guitar-oriented version of power metal that reminds me of Evergrey and Pyramaze, with synthesizers providing a symphonic edge, and vocals that remind me of the mid-ranged baritone style Matt Barlow used in Iced Earth. “Lost Voices,” the album opener, blasts right out of the gate with a crushing riff that sounds like it would be just as at home on a Swedish melodic death metal record as it does on a power metal record. The guitar tone, together with the hard snare and bass drum hits, give World of Silence MMXVII a heavy edge that never really lets up, even on more ballad-like tracks such as “Divine Answer” and “From The Fading Screams.” Matt Marinelli has a very powerful voice, which always manages to match the mood needed for each song; it’s crisp and clean in the slower, more melodic moments, and then gets a slightly gruffer feel in the heavier moments. Every member of the band pulls his weight, with everyone having a chance to shine throughout each track, though the guitars are definitely pushed to the forefront in the mix.

This is an example of exactly how to handle a rerecording of an album; there are a few differences between the two versions, with a somewhat deeper, chuggy guitar tone, but for the most part, Borealis stay faithful to the original. The heavy moments are heavier, the solos are jaw-dropping, the drums sound bigger, the synthesizers continue to be larger than life, and the vocals are a bit more mature. The production is excellent, with a clean-sounding mix, which, given the melodic nature of the music, is exactly what the doctor ordered. The heavier riffs really pound hard on the listener’s eardrums, while the more melodic bits provide the perfect counter, soothing the listener. Fans of power metal in general will certainly enjoy this, while I’d dare say even melodic death metal fans will find a lot to like, particularly in the riff department (I’m reminded of Dark Tranquility in particular). Longtime fans of Borealis, take comfort in knowing that the band have treated their debut with the utmost respect, and I think it’s safe to assume many will fall in love with these songs all over again.

Excellent rerecording of Canadian progressive power metal outfit Borealis' debut album. Will please longtime fans, and likely draw in new fans as well.
Reader Rating0 Votes
Excellent production
Tight, solid work from the instruments coupled with strong vocal performance
The tone is a little more low-end than the original version, which some fans might not like
4.5