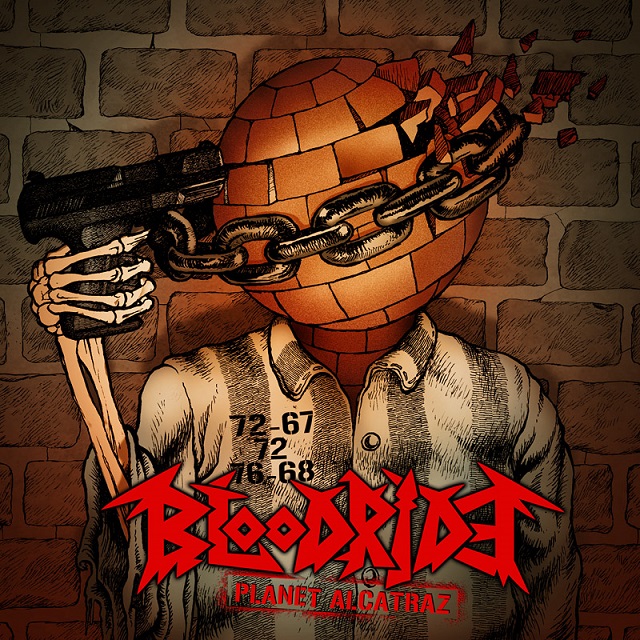 Hailing from Finland, Bloodride claim that they tie together pieces of the past and future of thrash. Honouring tradition is almost always a recipe for success in this genre, but the more intriguing part of their tagline is the future elements of their performance. Can the band strike the careful balance between the glitz and glam of new styles and the devotion of tradition?

Planet Alcatraz is a whirlpool of violence. The spotlight of this maelstrom falls upon the vocals and the guitar as the percussion and bass struggle for air. The vocals constantly rip from the singer’s vocal cords and are accompanied by mildly cheesy group shouts. Very little interest blossoms in the lyrics as they are largely indecipherable, but they do spawn some fun misheard phrases like, “Drink our onions!” Vegetable smoothies aside, the constant aggression of the vocals is both a good and a bad thing. Though there is never a moment of wondering if the lead singer isn’t giving it his all, constantly keeping the performance turned up to 11 spawns bars that are impossible to distinguish from one another. The guitars shift between slow chugging and frenetic riffing and takeoff in solos that are mostly predictable and surprisingly short-lived. The album is a Molotov cocktail of thrash, yet it burns and fizzles out too quickly.

For all the energy and insanity that Planet Alcatraz possesses; it is sorely lacking a reason to keep coming back. It is a terrific piece for moshing and undoubtedly would be a wild performance live, but it is just not memorable. There is a lack of touchstones, or moments that stand out and make an impact except for drinking onions, but I doubt Bloodride want to be remembered for that. Moments of odd, upbeat riffs populate the performance, but the main focus seems to be on projecting an image of toughness and aggression. The band’s full throttle attempt to create the image only manages to emulate these qualities rather than become them.

Planet Alcatraz is not without its strong points. The work teems with effort and energy that is sure to get heads banging. The vocals are likely to encourage shoutalongs, and the guitar will probably inspire some air guitarist. But in all the madness, the percussion and bass are swallowed whole and their lack of presence is disconcerting. While the aggression is powerful and commanding, key aspects such as memorability and individuality escape the performance. Bloodride bring competent technical elements, but the formulaic approach leaves the music without an outstanding personality. The album is strong, but doesn’t have the character to separate itself from the crowd.

A flawed piece that flaunts the love sunk into it.
Reader Rating0 Votes
Lots of energy and insanity
Hilarious moments
No character
Easily forgotten
3