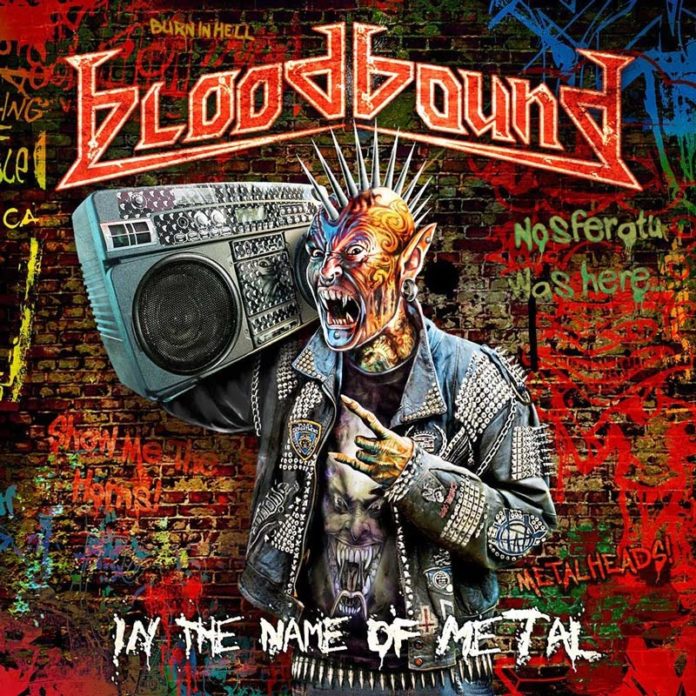 After just a year long brake, Swedish heavy metallers Bloodbound are back with a new release, In the Name of Metal. A follow-up to Unholy Cross, the band’s latest effort is a record that should take you to the magical lands of steel rivers, metal templars and cheesy choruses.

Scratch that; In the Name of Metal is more likely to take you to an 80’s bike show or a rock-flick like Airheads, since the album features a lot less power metal trademarks, and instead focuses on a more traditional approach, honoring acts such as Saxon and Accept. The production, the songwriting and the overall feeling of the album remind a lot of their vastly popular country-mates HammerFall, around their Renegade years. And indeed, one can’t miss the obvious homage to “Templars of Steel” in “Metalheads Unite” or a nod to HammerFall‘s earlier works in “I’m Evil.” In fact, this whole album reminds too much of the Swedish heavy metal giants, before they’ve forsaken their power metal roots and decided they are a bunch of bikers. Anyway, although this comparison might be appealing to some, I think that we’ve already had enough of these bands that there is no need for yet another clone. Songs like “Bonebreaker,” “Son of Babylon” or the title track might be enjoyed by twelve-year-old kids in a brand new Iron Maiden T-shirts, but for the rest this album is just a big freakin’ deja vu, playing on the safe cards and stereotypes us “old folks” have heard a million times before (“M-E-T-A-L, for metal,” come on!).

However things turn brighter towards the end of the album, and there are a few really pleasant surprises, such as “Mr. Darkness,” Edguy-like “King of Fallen Grace” or “Monstermind,” that has a slight Mercyful Fate feel to it in the introduction. Patrik Johansson’s vocals are more than satisfactory, have a good Accept vibe to them, and actually remind a lot of Mark Tornillo’s. The production is handled well, clean and heavy with a strong accent on the guitars.

In the end, I urge you to give In the Name of Metal a chance and weigh the record for yourself. The album still has a lot of bright moments, but the harsh criticism comes from the fact that I believe that this bunch is capable of much more than coming up with an album full of HammerFall rejects and B-Sides. However if they don’t pick up the pace and don’t receive an injection of inspiration they won’t be in for the brightest of futures.