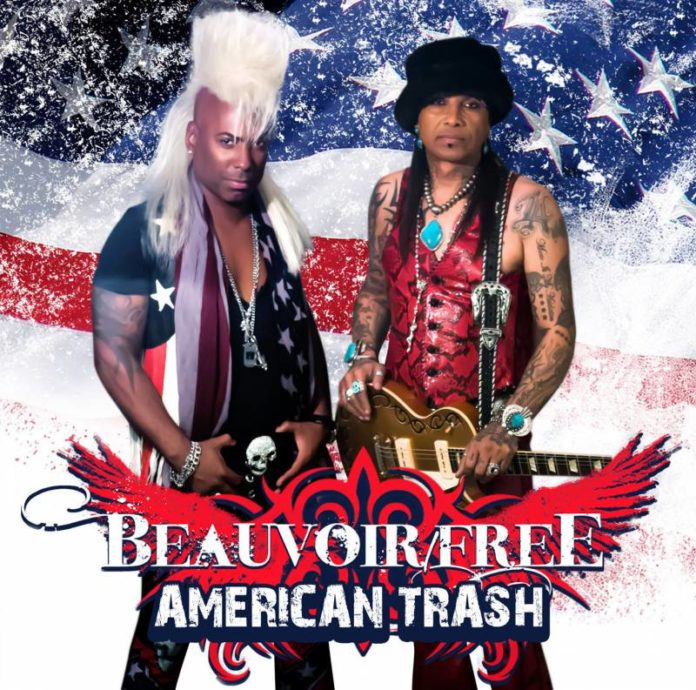 Undoubtedly the first thing you’ll notice about American Trash is the cover art: two African-American guys who look like they were members of Nitro in some alternate dimension, posing in front of an American flag. Holy crap. Like… what? It’s the kind of thing that would intrigue just about anyone while still giving absolutely no hint as to what the sound of the record will be. I know that both of these guys have been very successful in their previous musical endeavors, but come on! This is a Frontiers Records release, a label that releases pretty much exclusively AOR, hard rock and melodic metal, putting out a record by former members of The Plasmatics and Shalamar (!). God damn. The thing nearly fried my brain before I had even listened to it.

Once inside though, what the listener is greeted with is a fairly standard, well produced (again, this is being released by Frontiers), but nonetheless enjoyable melodic hard rock record. In fact the only real problem from the standpoint of someone writing for a metal website is that it is not really what one could call a heavy record. While that doesn’t make it a BAD record, I feel like that’s still something that needs to be pointed out. There are still some decently rocking moments for sure: the opener, “Angels Cry” has that “summer day at the rock fest” kind of vibe to it, as does the title song, but for every song that definitively grooves there’s a sappy, schmaltzy, usually acoustic ballad like “Just Breathe” or “Never Give Up”. Finely written, and still entertaining if you’re in the right mood for it, but if you’re looking for balls-out headbangers you’ll find flat-zero on American Trash.

The fact that these two guys have been session men for about twice as many people as years that I’ve been alive is proof positive that they can be trusted to put on rock solid, dependable performances every time the strap on and turn up. It really is immaculate how well put together the whole project is, and any musician, producer or anyone involved in the composition, recording, or performance of music would to themselves a big favour to listen to American Trash. Though there are some pretty clear deficiencies in the record from a “metal standpoint”, the album is nonetheless a masterclass in how to make a crisp, clean, professional, finely honed rock album.

IN A NUTSHELL
Throw this on at your next BBQ or outdoor kegger and no one will complain. Beauvoir Free have delivered a happy, catchy, sunny slice of summer and pressed it to wax.
POSITIVES
Beautifully written, performed, and produced
A clear abundance of talent
Lots of great, summer-ready melodic hard rock to be had.
NEGATIVES
If you're looking for real headbanging shit, look elsewhere
Shmaltzy ballads are shmaltzy.
4.5