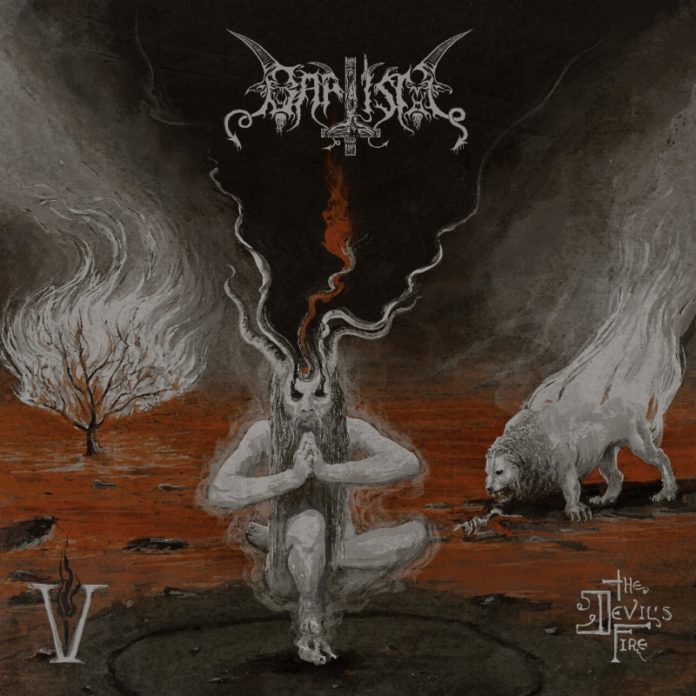 With their latest album, the oft-changing line-up of Finnish group Baptism makes a move over to Season of Mist, something which marks a new point in the band’s existence (thus the ‘V’ of the title). Packing in about forty-five minutes across eight songs, the group puts in a good show for their new label debut, playing black metal with a good level of depth to its writing.

It’s a very capable album, and while it’s not exactly revolutionary, it all comes together in a terrifically well-structured way that puts its energy into serving the songs. The anger of the music is focused, instead of coming across in a broad blast, so while fans of the rawer side of black metal may be disappointed by the relatively calm venom of the vocals and instrument timbre, the organization helps considerably in the band’s delivery of a firm and effective set of black metal tracks. The drums (probably my favorite element in these songs) show a nice range across both hard and complex arrangements, the guitar-work is suitably jagged while leading through recognizable note-paths, and a few guests (from Demilich, Swallow the Sun, and Horna) pop in to prevent insularity from overtaking the proceedings. The last track (“Buried With Him”) also does a great job in fulfilling its role, bringing things to a close with heavy finality, with reverb lingering at the very end to seed desire to hear it again.

On the down-side, the lyrics (when I was concentrating enough to decipher the growls) didn’t seem to deviate from the usual themes, with darkness, eternity, vengeance, and death providing regular structuring. Admittedly, those are classic themes for a reason, and the band makes good use of them; it just would have been nice to hear a band which shows such flexibility apply that to the lyrical side of their music as well. Aside from that, my only complaint with enough substance to form into a full thought is that the album doesn’t literally make my jaw drop (a pretty good thing, as far as complaints go).

If you’re looking for something that will make you sit up and take notice, this isn’t really the album for that. If you’re looking for something that will hold up after dozens of plays, though, I’d definitely recommend The Devil’s Fire. Even at the first few listens, it comes off as sturdy and reliable, an album which could provide pleasing action for years to come. It also feels like an open letter to other metal groups (beyond the BM division) to suggest the possibilities that would be waiting for collaborations or splits, as the album’s best strengths (to my ears, at least) are in the adaptability the group shows from song to song, cracking open new things with each track, while maintaining that solid base.

IN A NUTSHELL
Dependable black metal with over a decade of experience behind its construction, totally worth grabbing if you're looking for something to stick with you for a while
POSITIVES
Built with a sense of reinforcing the songs equally for repeated listening
Good performances from each member
NEGATIVES
It never really feels particularly vicious by black metal standards, or moves far from the traditional forms
4.5