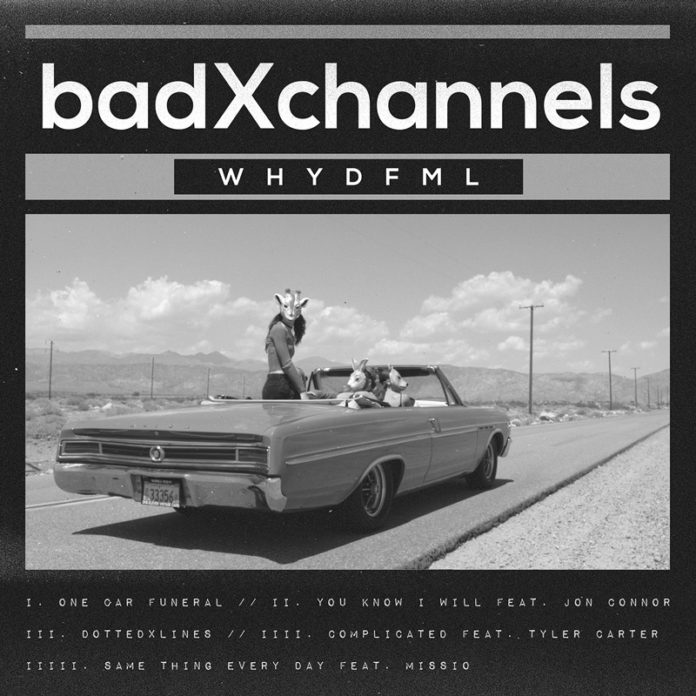 There’s a band out there called Chiodos. They’re a Warped Tour-style band that, if their Youtube videos are any indication, seems to be made for those who believe blink-182 are just too heavy. It’s the kind of generic, radio-friendly piece of shit music that appeals to the lowest common denominator, down to featuring a non-threatening asshole covered in tattoos that want to demonstrate that he somehow packs the kind of punch he so noticeably lacks.

As a result of, I assume, buying drugs from the same dealer, Nuclear Blast (via their subsidiary Sharptone Records) has decided to unleash the work of badXchannels, the solo project of Craig Owens, the tattooed asshole in question. This album, WHYDFML (an acronym that, to the best of my knowledge, stands for What Have You Done For Me Lately) is a gigantic piece of shit that should not exist. It’s really that simple, and you can just stop reading right now if you want to save time.

Since this is not a metal album, you might think that my judgment is based on that; that I’m putting down a non-metal release for, well, being “non-metal.” I assure you, that’s not the case. It is not that I have an issue with the genre (which, by the way, mixes indie rock with r&b, triphop and electronica), it’s just that the execution is so terrible, that I don’t know what niche they’re trying to appeal to. Think The Postal Service if they all lacked talent, had a substance abuse problem, and really wished they were black (because, yes, there is rap in this album).

Even people who are only mildly experienced with this style of music, and despite the self-congratulatory comments as to how amazingly “genre-bending” this shitty EP is supposed to be, will soon realize that it isn’t just that everything within it has been done before, but also that it has been done much, much better. This goes down even to the artwork (both in print and in the cringe-inducing videos) that feature the kind of pseudo-artistic visuals that become necessary when you try to cover up the fact that the emperor truly has no clothes.

It does not help that Craig Owens‘ voice is just terrible. It’s not just that his high-pitched voice sounds like a castrated teenager who never reached puberty, but also that he uses it to sing some of the worst lyrics I’ve heard in a long time. They’re mostly spoken in the 2nd person singular, telling some girl about how things got or will get “fucked up” (3 out of 5 songs), or how he’s totally gonna give her an orgasm:

The fact that his voice sounds remarkably effeminate, processed, and carrying the same level of testosterone as Justin Bieber in his debut album, make the whole experience even worse. It doesn’t help that he also takes the time to let you know how terrible it is to be famous, you guys:

“Ask me what it’s like on top
Ask me what it feels like to be dropped
When you’re least expecting that
You know the saying, don’t blow it, it’s your only shot
If they make you, they can break you
Let it get to you, then they break you
Chew you up, forsake you
The crisis of confidence is a constant chaos
For relevancy is costly
Someone please save me
I’m drowning in all this industry”

The promo images for this release feature Owens wearing a balaclava that, of course, reminds me of Pussy Riot. If we’re lucky, this pussy will also get arrested, thrown into a Russian prison, and we’ll never hear from him again. Vladimir, we’re counting on you.

In a Nutshell
Let's hope Vladimir Putin will throw this person into a gulag.
Reader Rating6 Votes
POSITIVES
Good production for the genre
It's a short EP
NEGATIVES
Absolutely everything.
0.5