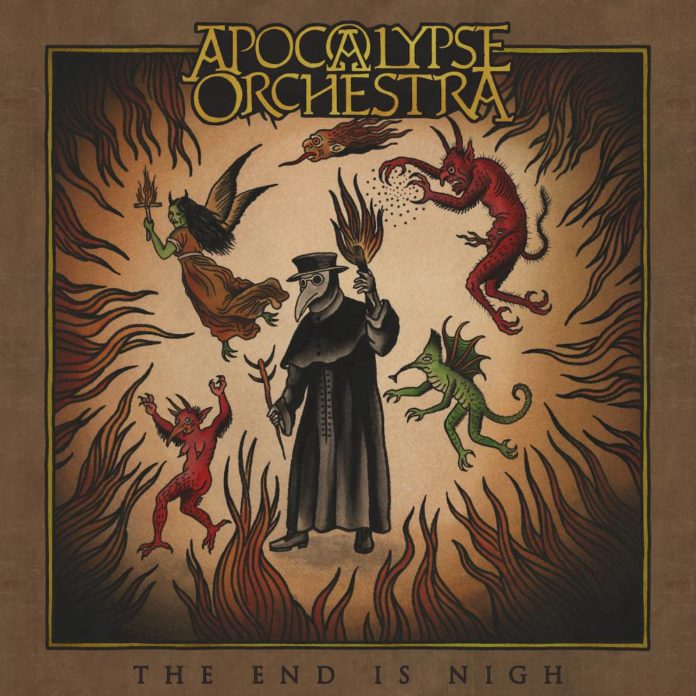 Finding the balance between modern heavy metal and traditional folk instruments has often been a struggle for folk metal bands, and one of the things that turns so many off to the genre. In some cases you’ll hear a band that are playing pretty straight forward power metal, that happens to have a bagpipe player; on the other end of the spectrum, you’ll have a traditional “oompah” band that threw in some electric guitars. The problem with this is it just doesn’t sound natural, giving the music an unintended cartoonish effect. In the case of Sweden’s Apocalypse Orchestra, however, when you hear the hurdy-gurdy (a traditional violin-like stringed instrument) alongside the thunderous electric guitars, it makes perfect sense.

The End Is Nigh, Apocalypse Orchestra’s debut full length, seamlessly weaves medieval-style melodies with crushing, epic doom metal in the vein of bands like Candlemass and Swallow The Sun. What gives this record an air of authenticity is that the band incorporates melodies that date as far back as the 12th century, as can be heard on the chanted intro to “Flagellant’s Song.” The riffs are heavy, but the use of orchestral synthesizers and medieval melodies truly add an extra layer to the music that simply works. If you were to isolate the different instruments (such as guitar, synth, hurdy-gurdy, and even vocals) on songs like “Exhale,” you’d still have a pretty complete-sounding song, which is a testament to the excellent songwriting and musicianship of each member of the band. There is just as much care and consideration going into the melodies for the traditional instruments as there is for the modern ones. Additionally, the vocals have a theatric quality to them (similar to those of Aaron Stainthorpe of My Dying Bride) that really match the melancholy mood and tone of The End Is Nigh, with “Theatre of War” being a great example.

As I mentioned earlier, in many folk metal records the bands come off as either adding the medieval instruments in as an afterthought, or throwing in some distorted electric guitars so they can qualify as a metal band. The styles don’t always mix well, and you wind up with a fairly uneven sounding production; either the “folk” side of things distracts from some pretty killer riffs, OR you have a decent folk album that has some jarring (and poorly recorded) electric guitars and growled vocals. Once again, however, The End Is Nigh really shines in the production department, with every instrument and vocal passage given equal footing in the mix. The melodic, medieval-tinged instruments work in perfect tandem with the heavier doom bits, again reminding me of bands like Swallow The Sun and My Dying Bride, who have similar melodic/brutal vibes. Even though there are certainly plenty of overdubs mixed into each song, the sound levels and use of reverb gives everything a pretty uniform sound.

If you like your doom with a bit more melody, or are already a fan of folk metal, Apocalypse Orchestra’s The End Is Nigh will be an excellent addition to your collection. Considering this is the band’s first full-length record, I am thoroughly impressed, and look forward to seeing what the future holds for this band.

Apocalypse Orchestra - The End Is Nigh
Reader Rating3 Votes
Pristine production, couple with excellent songwriting
Great mix of medieval melodies and brooding doom metal
The vocals match the mood of the music perfectly, with a mix of clean and occasional death growls
If you're not into medieval/folk influenced metal, the use of traditional instruments might turn you off
5