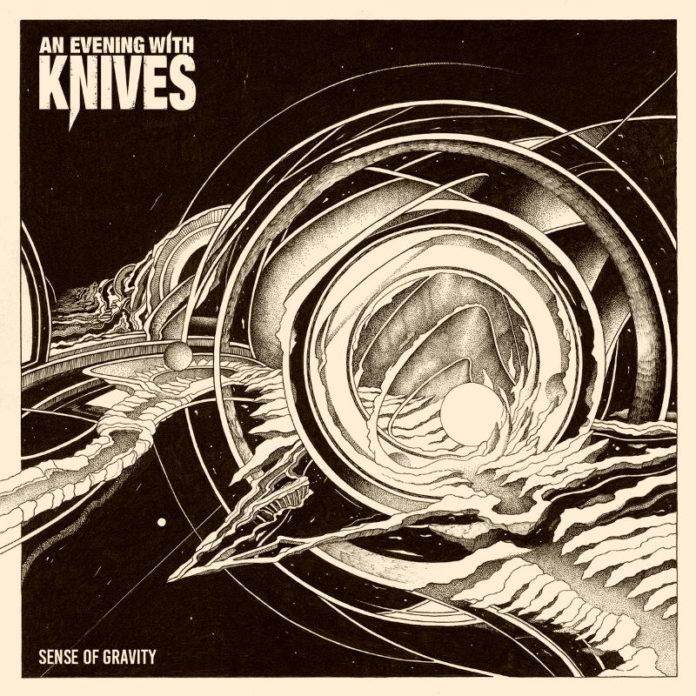 Following up on Serrated, their first album, An Evening With Knives have made a speedy return, serving up more of their heavy rock, but with a much stronger sense of their own style. When I reviewed their first album back in 2018, my main complaint was that, while they showed promise and strong interplay, AEWK weren’t doing enough to distinguish themselves from the today’s masses of heavy rock groups. To their credit, they’ve done a lot to improve on that front, evident from the first snarling yell and sharply-handled chords of the opening song, “Sacrifice”. There’s more anger, the riffs are clearer (and more likely to lodge in long-term memory), and, overall, the band seems more excited to be playing their music. Admittedly, the main melody did have my mind drifting back to The Offspring‘s atypical psych track “Pay The Man”, but AEWK fared much better in the comparison.

As the album continues through its forty-two-minute run (ideally readied for a vinyl side-split right after the track titled “Turn the Page”), the band delivers satisfying compositions and performances, whether going hard or leaning back into some more thoughtful moments. One of their stronger qualities this go-round is their dazzling knack for crafting even the fill riffs with enough style and rhythmic flair to make you want to bob or bang your head along. The main down-side this time is the occasional noticeably weak lyrics, a fault cushioned by the fact that they’re writing in a second language, and outnumbered by the assorted strengths of the album.

For instance, there’s the change to the guitar’s timbre and presence, with guitarist/vocalist Marco Gelissen showing an earned swagger to the sound of the chords and psych-flavored noodling. The support from bassist and backing vocalist Peer van Grunsven is often where the music’s sinister tones are most clearly heard, managing both rumbling dissonance and clear tonal emphasis with high style, while occasional use of minor keys for contrast throws a chill into the grooves. Drummer Ivo Jonkers (who’s also the sample overseer) keeps the rhythms sharp, compelling, and shifting in intensity, and as a whole, the trio impresses over and over again.

The album’s longest track, “On Your Own” (presumably the B-side opener) shows AEWK really spreading their wings, with layers of melody and rhythms coming together in the LP’s most outrightly psychedelic arrangements. The driving beats stay strong even in that more brain-loosening mode, calling to mind some of Mondo Drag‘s finer moments while highlighting the band’s ability to fuse psychedelic rock, post-metal, and doom metal, without lingering too long in any one mode. As a trade-off, the back end of the album is so strong that it kind of overwrites the earlier songs in memory as you’re listening to it in one sitting. Still, to hear the band making such striking improvements to their music while still holding on to a sense of their original character is impressive, maybe even a little inspiring. Respect to them for that, and for putting out one of the year’s best albums so far.

An Evening With Knives – Sense of Gravity
THE BOTTOM LINE
Some great genre-blurring rock, and a very satisfying show of a band coming into its own on their sophomore release
Reader Rating0 Votes
POSITIVES
Excellent playing
Strong song-writing
Effective balance of vocals and instruments
Fun grooves
NEGATIVES
The lyrics let down the playing at times
The calmer songs are left in the dust once the band really gets going
4.5