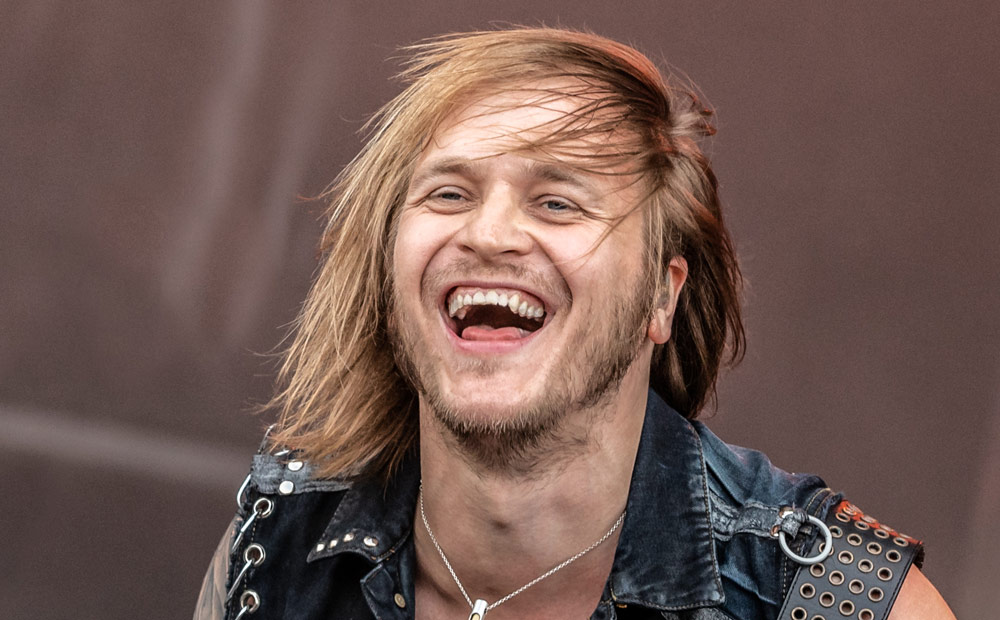 Note: This interview, together with others that will be published in the coming weeks, were made before the pandemic as part of a larger project that (for obvious reasons) had to be postponed indefinitely. Instead of just waiting until things go back to normal, we have decided to make them available.

I first became a fan of Battle Beast after listening to their 2015 album Unholy Savior. Although I had listened to some songs from their first two releases, it wasn’t until Unholy Savior that everything kind of “clicked” for me. Part of my enjoyment definitely came from the fact that they didn’t seem to take things too seriously. Their music was cheesy (as you’d expect from a band with many songs about a manga series), using keyboards and synthesizers in a way that seemed like a constant homage to 80’s pop, with powerful banshee vocals, and heavy metal music. That combination shouldn’t work, but it absolutely does.

As the band toured to promote their 2019 release No More Hollywood Endings, I met with Eero Sipilä, bassist and founding member of Battle Beast, to discuss fame, songwriting, Transformers, switching a double bass for an electric bass, and how hard it is to get good vegetarian food while you’re on the road.

If you don’t have any good ideas, just work with your shitty ideas, and at some point something good is going to come out.

Metal Blast: There’s no doubt that Battle Beast are becoming a household name in heavy metal. How has this changed the dynamic in the band?
Eero: It’s hard to say, because it has been a gradual change, and not an overnight thing. Every day, on the bus, I still think that there probably won’t be many people there to see us…maybe 50 or 60, and I tell myself that we’ll try to have a good time anyway. It’s always a surprise to see that a lot of people come! “Who are these people!? What are they doing here?!“. It’s a bit of impostor syndrome.  As fans, people don’t see that side of it.

MB: When did you start to realize that the band was moving up?
Eero:  Definitely the [2017] Bringer of Pain album, because it was a really big step for us, especially in Finland, where it was a hugely popular album. I mean, Unholy Savior was also popular, but now you could see new kinds of people coming to the shows, not just the hardcore power metal dudes, but also just regular people who liked rock music and just wanted to have a good time. That’s when I realized that we had broken out of this “box” of the core audience, and that more people were discovering us.

MB: Bringer of Pain was also the first album that Battle Beast released after the departure of Anton Kabanen, who founded the band and, up to that point, had been the only songwriter. When I hear albums like Bringer of Pain and No More Hollywood Endings, I feel that they sound much more “poppy” and straightforward that what you did before. Was this just the result of simply having more songwriters involved?
Eero: Yeah; I mean, the music we did with Anton was music that all of us also liked, so it’s not that we don’t t want to make more music like that in the future or anything like that. But now, with more people writing the music, the range of influences is much wider. We still have the same heavy metal core, but also all of the other musical influences that com from each one of us.

MB: While now, in hindsight, we know that all of you were able to carry the band without Anton’s songwriting, you obviously didn’t know that at the time. Was there a concern that maybe you wouldn’t be “good enough” songwriters?
Eero: Sure, but that feeling also happens every time you have to make a new album or a new song: “I have to make a song… but what if I suck at it?“. Then you make some songs that suck, some that are pretty good, and some that are awesome. And those awesome songs end up on the album, and end up on the set-list. I’m sure that even a hit-making machine, someone like Desmond Child, also has times when he thinks “wow, I really suck! This is shit!” until, suddenly, it’s a number one hit. In fact, Desmond Child once said that if you have writer’s block, you should just allow yourself to play whatever dumb idea you have, and to make it a song. If you don’t have any good ideas, just work with your shitty ideas, and at some point something good is going to come out.
People look at songwriting as if it was a magical thing where you get a message from god telling you what to write, but most of the time it’s just you sitting in front of a computer with your guitar and going “uuuuuuuuuuuuuh”.

MB: Battle Beast often incorporates synthesizers and 80’s poprock sounds. What’s a big inspiration for you in that area?
Eero: I like cheesy 80’s films and their soundtracks. Lots of synthesizers and MIDI keytars. The transformer soundtrack  from the 80’s is a good example. Super cheesy, uplifting, and motivational songs.

MB: And what about heavy metal? I read somwhere that, for Noora, Iron Maiden was the band that kind of brought her to heavy metal. What about you?
Eero: Also Iron Maiden. The first time I heard “Aces High” I was like 14 and it blew me away. It really hits you like a drug. The Iron Maiden album from the 80s really stand out not only because they have great songs, but also because they’re really well-produced. Insanely so for the early 80s. All the harmonies are there, and that really makes a mark. I mean, look at Saxon, for example. I love the band, I love their songs, but their albums sound like they were recorded on a tin can. That sucks, because the riffs and the songs are awesome, but the sound… I mean, sadly, I wouldn’t even recommend those albums now.

MB: And to make it more specific, what bassists made a mark on you?
Eero: I played classical double bass, so I come from a completely different side. I keep going mentioning when I was 14, but that’s because it was around that time that I did a complete switch from classical bass to electric bass, and found my own sense of music. As for bassists that I looked up to, it’s really a boring answer, with all the obvious ones: Steve Harris (Iron Maiden) Geddy Lee (Rush), John Paul Jones (Led Zeppelin), were all huge influences.

MB: Many fans are unaware of the huge financial challenge that is created by being in a band. Recently I was speaking with Michael Starr, of Steel Panther, and he mentioned how none of the early tours paid any money, but that they were essential to make the band popular.  There often seems to be a long time in which “popular” bands simply struggle to survive, since you need to invest a lot of your money into just keeping the band alive. Was this also big challenge for Battle Beast?
Eero: Right now we’re at a moment when things are starting to pay off. For many years, I was really, really poor, living hand-to-mouth, because it’s impossible to keep a steady job when you’re a musician. “I want to work here, but is it OK if I leave for 6 weeks next month?“. It doesn’t go well.
For us this started right after the first album, because we still had some tours, which required so much time that they made education and work much harder.

MB: I know people who were in a popular band, never did anything else, and suddenly weren’t in the band anymore. It’s a fear that basically all artists have to deal with at some point: What will I do if this thing doesn’t work out?
Eero: Yes, and that’s really scary shit! Everybody is afraid of it, and it’s not a good way to live your life, fearing what might happen if the band flops, or if you get kicked out. It’s hard to say when it starts, or when it ends, because at some point you kind of just realize that this is your life, and that this is how it’s going to be, so that the band needs to be really high in your list of priorities.
Luckily, we’ve recently had some discussions about easing things a bit, so that if you have some personal problems you can make arrangements for someone to stand-in for you. I don’t want anybody to miss the birth of their kids (if somebody decided to have them), or their first birthdays, or stuff like that. That makes you a sad and bitter person, and that’s not what we want. I know that it’s a tradition to say that you need to be on stage no matter what, but I don’t think that’s a good way to do things, and it makes people fight each other.

MB: Finally, I know that you’re a vegetarian. Every vegetarian musician I know suffers a bit when they’re on the road and realize that often “vegetarian options” are pretty bad. How has it worked out for you?
Eero: You have to adjust. Most people try their best. I mean, sure while others are eating a steak and fries you just get two peas and a carrot, but you can always go to the supermarket and get whatever you need. I mean, when I’m home I eat vegan, but when you’re on the road it’s impossible. I mean, once, in Russia, the vegetarian option was chicken! [laughs]

Bring in the Doom: An Avatarium/Candlemass Interview

Cold as Hell: An Interview with Frost from Satyricon