One Day At a Time

I’m not exaggerating when I say that Hellfest 2022 will probably be remembered as the best heavy metal party of my lifetime. And that’s no hyperbole. Besides the fact that this will be the first post-pandemic metal festival for many of the tens of thousands of people in attendance (guaranteeing an energetic crowd), there’s also the fact that, for the first time in its history, Hellfest will take place over 2 weekends, totaling 7 nights and 7 days of pure heavy metal ecstasy. And then there are the bands. Metallica, Guns n’ Roses, Nine Inch Nails, Gojira, Megadeth, Scorpions, Volbeat, Judas Priest, Opeth, Helloween, Sabaton, Watain, Mayhem, Mercyful Fate, Social Distortion… and more than 300 others.

Anyone who’s ever organized an event will tell you just how many things can (and do!) go wrong. Something as simple as a clogged toilet or a blown fuse can derail everything, meaning that organizers have to be ready to act at all times. And that’s at a club show with an attendance of 100 people. Imagine the challenges when what you’re organizing is a show for 60,000 people per day, with over 350 bands spread throughout 7 days. You have to hope for the best, prepare for the worst, and remain constantly on your guard. 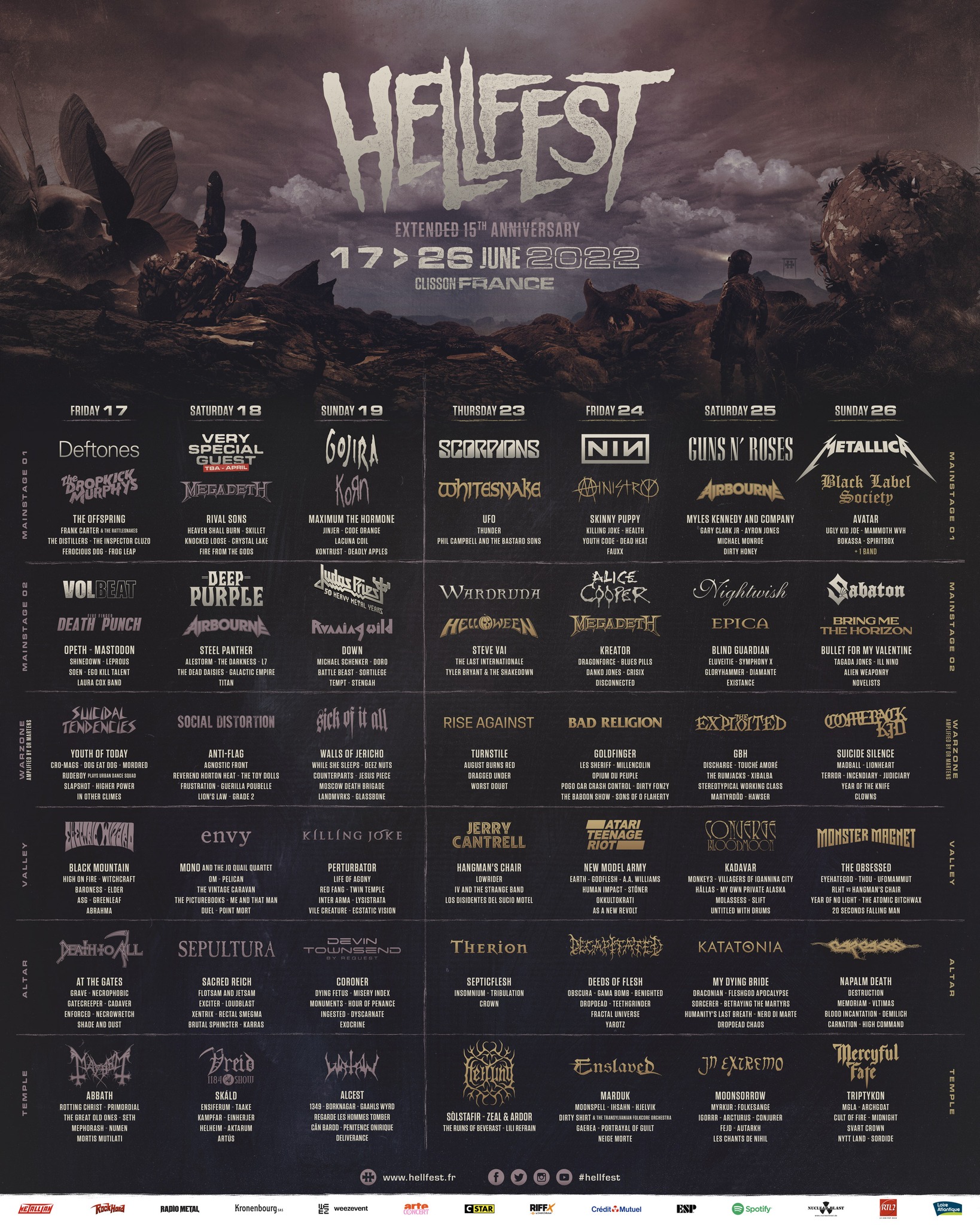 Eric Perrin is the Communications Manager of Hellfest. He has been working with the festival since 2012, when he did his internship with them, followed by several years in which he joined the more than 4 thousand volunteers that work during the festival itself.  He became a full-time staff member of Hellfest in early 2020, and he’s very happy about his place there. “They’re not just coworkers“, he tells me, “we’re like a family“.

Saying “we’re not a business; we’re a family” isn’t new nor, in general, is it honest. Most of the time it’s just a throwaway line to make a faceless corporation look human. But I don’t think that’s the case here. Hellfest’s full-time staff is made up of only 22 people and, if those I’ve spoken with are any indication, it seems to be a pretty tight-knit group. A whole culture has sprung around the festival and the people behind them, mixing heavy metal with the aesthetics of motorcycle clubs, with fans and staff (or “supporters” and “crew”) proudly wearing the colors and patches of their affiliation.

That kind of camaraderie was certainly an asset during the last 2 years, when the future of Hellfest (and of festivals in general) seemed to be up in the air. Back in early 2020, when the French government first announced COVID restrictions, there was still hope that everything would go back normal in just a few weeks. But then things didn’t go back to normal, and the restrictions kept getting extended. The pandemic forced the crew to live day-by-day, unable to make the kind of long-term planning that they were accustomed to, and which was essential to organize the festival.

For a while, cancelling was unthinkable. But as the crew realized that the pandemic was here to stay, it became unavoidable. Thankfully, they were able to cancel before they started setting up the festival. As Eric explained, if they had set up the festival only to then have to cancel (and take it all down), the financial loss would have been devastating. With the benefit of hindsight we know that this was the right decision, but at the time it must have felt like a game of Russian roulette.

Hellfest fans through the years
1 of 9

By February of 2021, after months of planning a new edition of the festival, it looked like the only option (based on the restrictions in place) would have been to host a mere 5,000 people, all sitting down. Hellfest founder Ben Barbaud didn’t want his festival to be limited to that nor, most importantly, did he want to offer such an unsatisfactory experience to the fans. Waiting and hoping for the rules to change wasn’t an option, since they needed to be able to plan ahead. Out of options, they pulled the plug for 2021.

“It was a relief“, Eric commented. Waiting in limbo for things to change was nerve-wracking, so making the choice to just focus on 2022 seemed like the right idea. But after two years of silence, they knew that they had to make it memorable. Ben wanted it “to be remembered as the edition of the century!“, so the team sprung into action to make it happen.

And then Metallica called.

Although, as he is quick to note, Metallica wasn’t the band that Ben Barbaud obsessed over in his teens, he sees having them at the festival as the crowning achievement of 17 years of work. And it makes sense; Metallica are part of a very select group of bands (which includes AC/DC, if you were wondering) that would normally be out of reach for a festival like this. When we spoke, Eric was adamant on just how unreal it all felt: “If you had told me two years ago that we’d get Metallica in 2022, I would have said that it’s impossible! It’s too expensive!“. But thanks in no small part to serendipity, it was now about to come true.

After two years with virtually no mass events, many bands are touring in 2022, and there aren’t that many places that can accommodate (and pay for) Metallica’s performance. As it turned out, with a gap in their 2022 summer tour, their management reached out to the festival and made themselves available at a price point that was within their reach. It was an offer they couldn’t refuse.

“They called us. We didn’t call them“, said Eric with visible pride. Getting what’s arguably the most famous heavy metal band in the world was a huge achievement, and the Hellfest crew had done it.

Peeking Behind the Curtain

Extending the length of Hellfest was all about economies of scale. Already in 2020 the crew had proposed doubling the (later cancelled) 2021 edition in order to absorb their losses from the pandemic. Aside from personnel, a big part of their fixed costs came from setting everything up, and then taking it all down, meaning that adding an extra weekend wouldn’t double their costs. It was still a challenge, of course, since it required extensive coordination with their staff, the volunteers, and with the authorities of Clisson, where the festival takes place.

Clisson is a little French town in the Pays de la Loire region. With a population of only 7500 (more than a quarter of which are over 60 years of age), the town is transformed by the sudden arrival of the tens of thousands of black-clad metal fans that come to Hellfest every year. While nowadays the town has fully embraced the festival (there’s even a French podcast about this symbiotic relation) it wasn’t always that way.  Originally, the townspeople were concerned about the kind of people that would come to Hellfest (there have even been some politicians and christian radicals occasionally protesting it), and so it was was thanks to hard work (and some ocassional help for the town) that the relation was able to flourish.

That amicable relation notwithstanding, space continues to be the biggest challenge faced by the festival. Every year they need to rent some additional land from nearby farmers, and those costs continue to go up (to the point that it has become more profitable to rent space to the festival than to use the land to grow wine). While there are no plans to increase the capacity of the festival (Eric calls their current limit of 60 thousand people per day “the perfect number“) the organization wants some more space to give the fans a better experience, and to add stages, food stalls, and even some lodging options. “Adding more people just increases the logistical challenges“, he assures me, “the priority is to make it comfortable for the fans“.

And comfort can be a challenge when you have 40 thousand people around you. That’s the maximum capacity of the main stage area, and which I’ve gotten to experience during Iron Maiden, Gojira, Kiss, and Rammstein shows, and which almost required me to use Cartman’s Metalhead Digger to get from the photo pit back to my friends (about 100 meters away). This is something that the festival is acutely aware of for this year, and so they’ve added new screens farther away from the stages, so that people who want to see Metallica (or any of the other amazing headliners) are not forced to thread through thousands of people to do so (you’re still welcome to try to make it to the front though). “It’s the last day, so maybe people will be tired after 7 days!” says Eric with a laugh, although neither of us really believes fans will be too tired to go absolutely crazy during Metallica’s performance.

As I reflect back on all the years that I’ve been to Hellfest (as well as to many other festivals) I realize how truly thankless the job can be. After all, we know that the organizers have done their job well if we never even think about their existence. It’s only when things go wrong that we think about those who make everything happen, and tell ourselves that we would have been able to do it better. And yet, at least as far as the Hellfest crew is concerned, they really seem to love what they do, are passionate about it, and seem legitimately happy to see the joy they bring to people year after year.

And it’s really eerie to think about how close we were to losing it all. Hellfest itself would not be here if it wasn’t because a state-sponsored recovery plan was put in place to help this business. So this success story shouldn’t distract us from the fact that, all over the world, the music industry suffered massively throughout this pandemic. Billions of Euros were lost, affecting not only bands, but also venues, caterers, security personnel, bartenders and, broadly speaking, the huge array of people who are connected with live entertainment. In the United States, the world-famous Maryland Deathfest has announced that they will not make a new edition next year, and that 2022 might be their final one. Who knows who could be next.

I’m not saying all of this to end on a negative note. On the contrary. I’m saying it to motivate you, and to remind you about the importance of supporting the arts. We know how boring the world is when stages are empty, so we should do everything we can to make sure it never has to happen again.

See you at Hellfest.

Click Here to Support Us!
Previous articleBringing More Women to Metal – An interview with Sonia Anubis
Next articleOn Getting Choked, Journalism, Racism, and Rebellion

When they start saying again, “Ladies and Gentlemen” at online workworks, then I will return, but not until then! Florida is a common sense conservative state where most people have brains! https://salaryto1.blogspot.com/

It Has Come to This: In Defense of Religious Speech