Deserted Fear Kicked Out The Musician She Accused Of Assaulting Her. Then They Hired Him Back

Editor’s Note: At the request of the victim in this story, her name, and that of the man she accused, have been withheld. We ask you to respect her wishes when commenting, or when sharing this story.

When she made a credible accusation of sexual assault against a member of Deserted Fear, Fiona thought that the band would cut ties with him. Soon after, however, he was back on stage.

Fiona (not her actual name) is a Dutch woman in her 20s. Last December, with some friends, she went to a bar in Tilburg, the Netherlands. That’s where she met Deserted Fear, the German death metal band that, on that same night, had just opened for At the Gates at the 013 club. 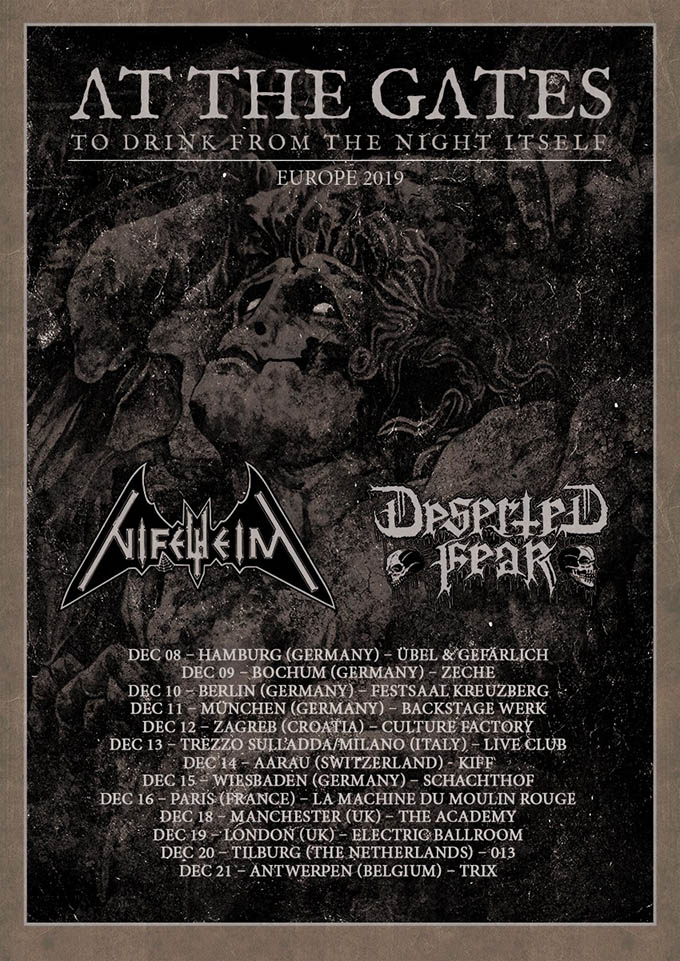 Once the bar closed, and since they all got along, Fiona and her friends invited the band (except for Deserted Fear’s singer, who was not there at the time) back to their place for an afterparty. At first, things were just as you’d expect from any party in the middle of a tour: Lots of drinking, joking, and laughing. The band asked if they could sleep over, since otherwise they’d have to walk back to their tour bus, and some of them were already very drunk (one of them had even passed out). Since there were more people in the house, and there were no reasons to suspect anything negative, the band was allowed to stay.

Fiona got scared, felt threatened, got out of the room crying, and said that the band had to leave, or she’d call the police.  Her friends stayed with her, as they felt that they needed to protect her. One of Fiona’s friends, who spoke with me under condition of anonymity, said that, although she was not in the room where the alleged assault happened, she was there when the band members were told to leave, and stayed with Fiona for the rest of the night. She confirms that, at the time, Fiona was crying, visibly upset by what had just happened, and told them that she had been sexually assaulted.

She wrote about it on Facebook as a way to let others know what happened to her. She didn’t want others to go through the same thing, and that seemed like a good platform to get her story out. 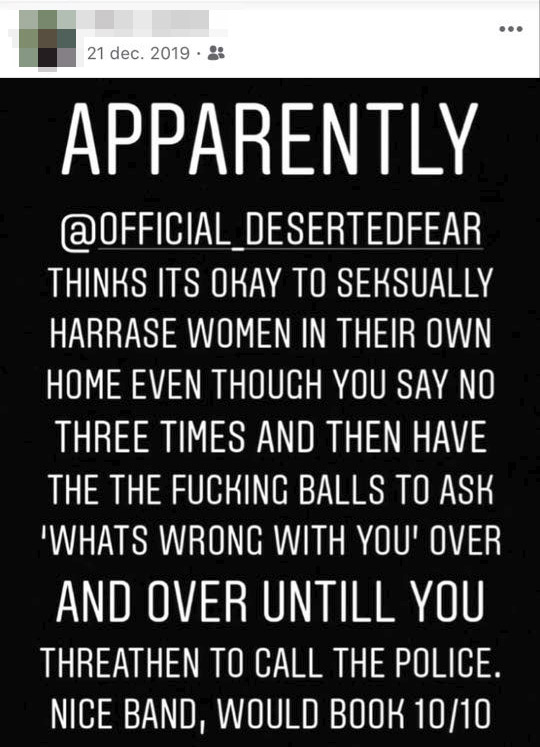 Due to her post, the band’s Tour Manager (who never gave her his name), contacted her on Instagram. At first, it seemed like he just wanted to know what had happened.

Fiona then went through the painful and humiliating process of explaining, in detail, what had happened to her. The Tour Manager said that the whole situation was “a bummer to say the least“, and that he was sorry that it had happened. He then switched gears, and explained to her that the accused musician was only a session musician, that the singer of the band had not even participated in the entire thing, and that therefore it was not “fair” to target the entire band. 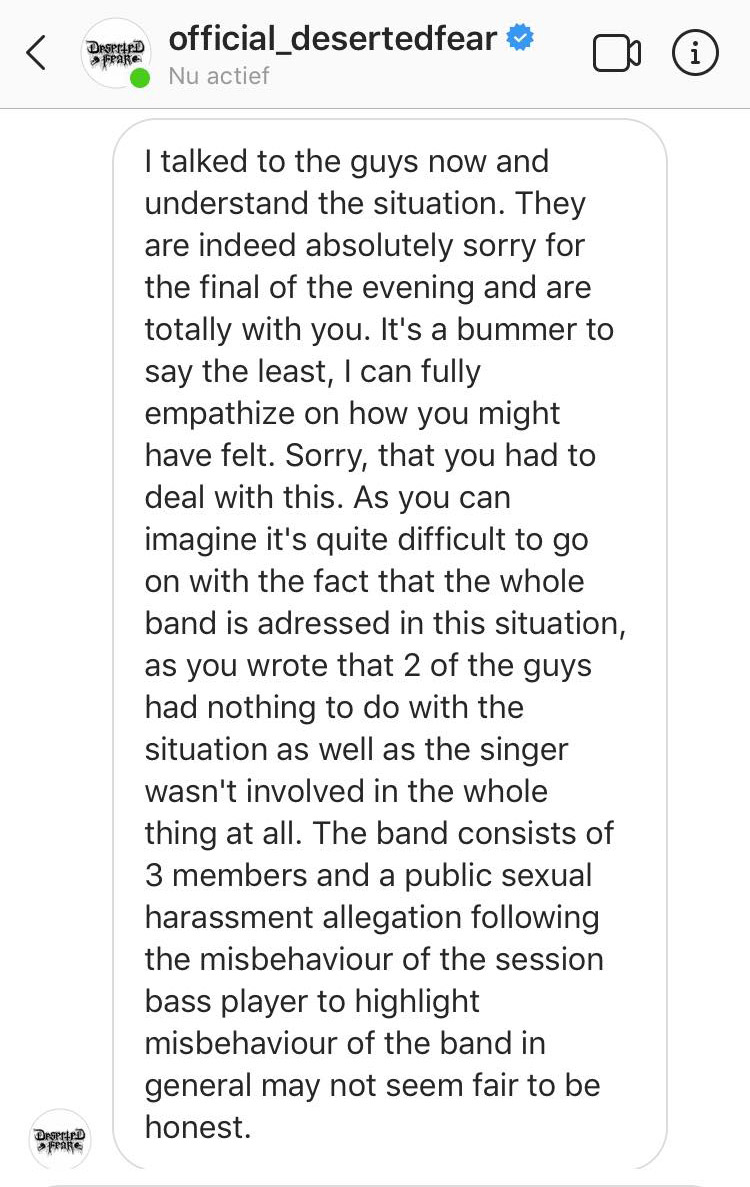 For a person who was trying to bring attention to her own story of sexual assault, it was obscene that the band was being portrayed as the victim in the situation. It demonstrated the kind of “damage control” mentality that abuse victims often encounter from organizations that employ their abusers, and whose priorities are about saving face and protecting their reputations. Later that day she also heard from S, who contacted her on Instagram to apologize for what he described as being an “asshole” who was “completely disrespectful”. She did not reply. 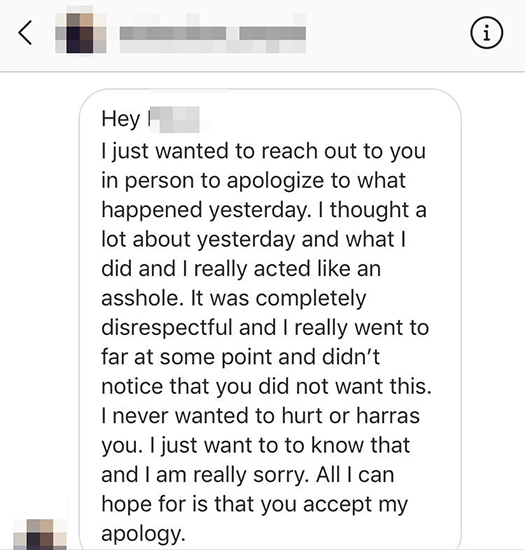 While this was happening someone in At the Gates‘ crew, and who spoke with me under condition of anonymity, heard about what happened to Fiona. Although there was still one more date left on the tour, due to what happened, the At the Gates‘ team did not want S there anymore. They talked with Deserted Fear‘s Tour Manager, and it was agreed that S would not perform with them and would instead be sent home immediately. In light of their behavior, it was also agreed that no alcohol would be provided for the backstage area of Deserted Fear when they played their last show of the tour, in Antwerp, Belgium.

Fiona went to the police in the Netherlands. Very quickly, however, she realized that her chances of successfully pressing charges were slim. Sexual assault allegations are notoriously difficult to prove, and she did not want to have to undergo the mentally draining process of going through a criminal trial. Sexual assault accusations often lead to questioning the victims’ morality, or life choices (“what was she wearing?” “was she drinking?”) instead of focusing on whether or not she consented, and she did not want to subject herself to that.

After Fiona heard that S had been kicked out of the tour, however, she decided to just move on. She wanted to leave the memory of the assault behind her, knowing at least that the band had cut their ties with the man she accused of assaulting her, and who had even apologized to her for doing so. It didn’t seem like there was anything left to argue about.

But then, only a couple of weeks later, apparently thinking that the dust had settled and that it was time to move on, Deserted Fear brought S back.

Fiona only found out about this recently, on social media. She had been trying to move on from the event, and had always assumed that S’ behavior would not be tolerated, let alone rewarded. At the very least, she had expected that there would be some consequences for his actions, and that some amount of accountability would exist. She didn’t want S’ life to be ruined; instead, she wanted her victimization to be seen for what it was: Not just a “bummer,” or as someone just being “an asshole”, but as a serious story of sexual assault that would not be swept under the rug without any consequences. And yet, despite S having all but admitted to the accusation by sending her an apology, despite him having been kicked out of the At the Gates tour, and despite Deserted Fear having tried to distance themselves from what they referred to as only a “session musician,” the band had brought him back only a couple of weeks later. It was as if what happened to Fiona simply didn’t matter.

Fiona and her friends tried repeatedly to get an explanation form the band via private messages, but they received no response. On Friday, July 24th, affected by what she perceived as a failure by Deserted Fear to take her accusation seriously and hold S accountable, Fiona made her story public on Facebook. Although the band did not get back to her (nor, as of this writing, have they contacted her) the band immediately went on the defensive. They closed down their Facebook page, as well as the comments section on their Instagram and Youtube.

In the past few days, we have been forced to temporarily deactivate the comment function or our page in total, as they were used as the target of defamation and unreflected [sic] accusations. We strongly distance ourselves from all forms of sexual violence. We will shift communication on this matter to an appropriate and legal level, as we do not see social media channels as the tools for adequately dealing with this serious issue. Until the facts have been fully clarified, we will appear without our session bass player and speak again as soon as possible in a yet to follow statement.

Although in their statement Deserted Fear used the legal term “defamation,” and despite numerous requests for clarification, the band did not say what part of Fiona’s story was defamatory, nor did they offer an alternative narrative.

Fiona’s is not just a case of he-said/she-said. There are corroborative witnesses who can confirm the behavior that they saw in the house, and that Fiona immediately said that she had been sexually assaulted. Her story has not changed since the first time she made her accusations, nor has anybody (neither Deserted Fear nor S) questioned the accuracy of her statements. What is more, S apologized to her, and was kicked out of the tour. And yet, despite all of this, Deserted Fear still went back to working with him only weeks after what happened. For survivors of sexual assault, this absence of accountability, this gaslighting of victims who see their assaults minimized or ignored, are constant reminders of how far we still have to go in order to adequately protect their rights.

Fiona’s story is not unusual. Failure to hold people accountable for sexual assault and harassment is an endemic problem in society. Although it is easy to blame this only on the evidentiary difficulties that are inherent to sex crimes, it is actually more complex than that. It goes back to the immediate aftermath of the assault, and to how victims must think about what just happened to them, and try to make their voices heard. Many women report how they often see their experiences minimized (“boys will be boys”), or dismissed as if what happened to them wasn’t a big deal. They fear being blamed for their own assault, and the public shaming once their own sex lives, or the way they dress, or how much they drink, is used to justify and explain away the manner in which they were assaulted.

Although it is true that the rights of any accused party must be protected, and that they should be presumed legally innocent until a court finds otherwise, it is also necessary to let victims know that we are willing to listen to what they have to say. No reasonable person would say that we have to believe every accusation; but, at the same time, how can we even start to discuss who to believe, when some have made it so abundantly clear that they do not consider sexual assault to be such a serious thing after all?

For now, Deserted Fear are scheduled to appear at the “European Metal Festival Alliance”, ostensibly with a different bass player. It is difficult to tell how, in times of COVID19, not having a live bassist will actually affect them. Meanwhile, Fiona still lives in the Netherlands, and continues to recover from her experience. She has made it clear that the only thing she wanted from all of this was to get an explanation: Why did Deserted Fear go back to working with S? Why did the seriousness of sexual assault get downplayed like this?

So far, the only answer has been silence.

“But What Was France Wearing?” Victim-Blaming and Religious Terrorism

"Màlmhaus is probably one of the best films about heavy metal and its culture, showing how music can help people find their own place in life."
Read more
Articles

Well written and cutting straight to the core issues, treating the subject with the respect and care it deserves. The band need to take accountability, their actions are disgusting throughout this whole situation.

Biting the Hand that Feeds: On Disrespecting Fans and Enforcing Copyrights

How I got Banned from Photographing Arch Enemy